Duggan won't provide details on fund linked to his administration 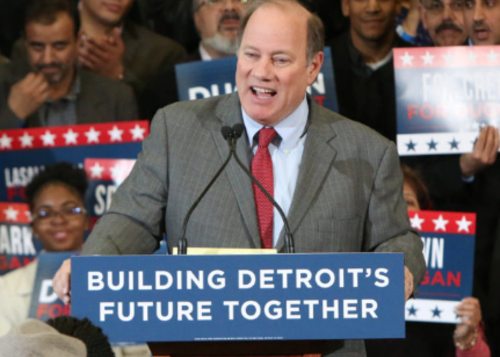 Detroit Mayor Mike Duggan is dodging media questions on how a nonprofit set up to support some of his administration's initiatives spends its money.

According to a new report by WXYZ, the Duggan-linked Detroit Progress Fund has offered only a vague accounting of how it has distributed $750,000 since 2014. Disclosures to the IRS list things like "community outreach" and "travel," for example.

Duggan has taken steps to avoid some criticism by disclosing the Detroit Progress Fund's donor list. But the lack of full transparency falls short of a campaign promise he made in 2013. WXYZ runs back video in which Duggan pledges to have "no part in a secret fund when I’m elected.”

Today, however, Duggan appears to be cool with at least a little secrecy:

... "the question is, if you have nothing to hide, why not show us exactly how it’s being spent?” [asked WXYZ reporter Ross Jones.]

“There has been no suggestion of anything wrong,” Duggan said.

It's the latest L for transparency from Duggan, who's currently embroiled in a scandal over his steering of city funds and resources to a program run on a volunteer basis by his rumored mistress. What's more, city staff involved in fundraising for the program were ordered to delete pertinent emails when the media came sniffing around.