Chicken Sandwich Craze: Detroit Chef on Livernois Brags Has a Winner, He Brags 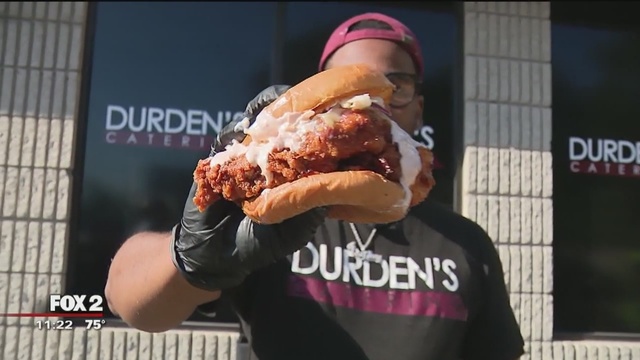 The chicken sandwich craze triggered by Popeyes new offering last week is catching fire across the land. People are obsessing about fried chicken sandwiches and where to get the best one.

In Detroit, Chef Tony Durden of Durden's Catering at 20504 Livernois, just off of Eight Mile, is entering the fray with bragging rights about his monster chicken sandwich called the Young Gripper, Randy Wimbley of Fox 2 reports.

Durden, who also runs a takeout counter on the back end of Baker's Keyboard Lounge at 20510 Livernois, brags that he has the biggest, baddest chicken sandwich, Fox reports.

"You've got the chicken breast rubbed down in marinade, a five-spice blend. We toss it in the batter, we mix up, toss it in the flour, drop it in the grease and when that thing comes out of the grease serve it on a tasted brioche bun, spicy coleslaw and some of our bang-bang sauce," Durden tells the station.

The craze started last week when Popeyes offered its new sandwich — a fried chicken breast on brioche with pickles and either spicy or plain mayo. It attracted long lines and by Tuesday, the company said it had run out of the sandwiches.

Chef Durden, who earned a Baker College business degree with a major in culinary arts, trained through its Culinary Institute of Michigan progfram. In 2006, he established Durden’s Catering.