The School at Marygrove logo

The freshmen begin classes on the 53-acre Marygrove College campus, which has been called "Detroit’s most elegant place to learn," the college boasts.

The Class of '23 teens inaugurate "the high school portion of the School at Marygrove, a partnership between the Detroit Public Schools Community District, the University of Michigan and the Kresge Foundation," writes John Wisely of the Free Press in a feature accompanied by 14 photos. 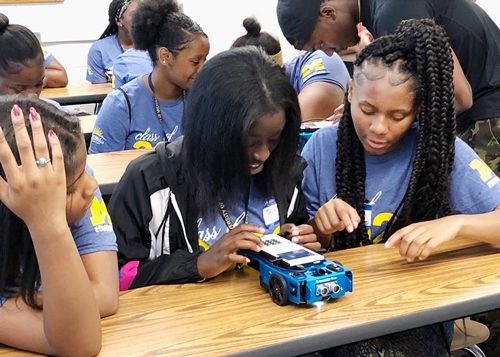 The foundation "has committed $50 million to a project to transform the longtime Catholic college into a community hub of learning and neighborhood revitalization," the paper adds.

The School at Marygrove will eventually serve what organizers call P20, for pre-school to age 20, sometimes dubbed cradle-to-career. It's a partnership that includes a child-care component, after-school and summer programs and a teacher residency program, where rookie teachers can hone their craft by working with more experienced mentors. . . .

U-M will offer dental and medical services there in addition to a counseling center. The City of Detroit also is involved, incorporating the project into a larger effort to revitalize the neighborhoods surrounding the campus at the southeast corner of McNichols and Wyoming. 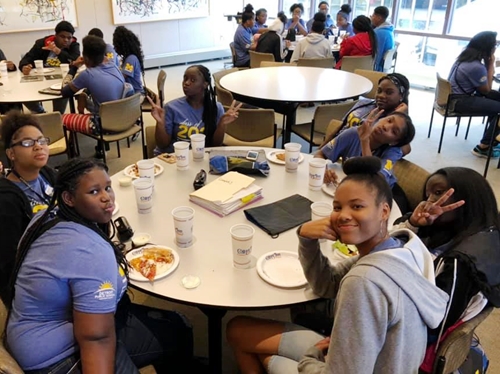 Participants in the new program during this summer's UM visit.

Marygrove closes in December after 92 years of operation because of declining enrollment. "But the campus will remain an education center," Wisely writes.

The high school portion of the School at Marygrove will emphasize engineering and design, as well as social justice.

The high school will be housed in the college's liberal arts building, which retains the architectural glamour of its jazz-era roots [in 1927]

The new program is Detroit's fifth high school with an entrance exam. The others are Cass Tech, Martin Luther King, Renaissance High and Southeastern High.

The partial focus on social justice triggers criticism from a conservative fringe group. "Your tax dollars will be used to create the next generation of hard left social justice warriors," says a post at RightMI.com, which opposes "the socially destructive nature of the left . . . through education and awareness." Its reflexive swipe at the new program adds:

The engineering education secondary theme of this school is just bait to get wary Detroit parents to turn their children over to the control of a bunch of snotty elitists.  A despicable ploy to take advantage of the desperation of parents with bright children trapped in the never fixed Detroit Public School Community District.

You are looking at the next generation of left wing screwballs in the making.