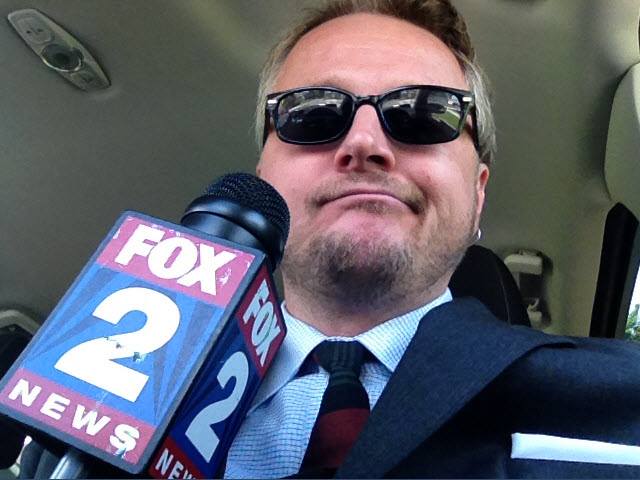 A decision by Fox 2 to abruptly suspend reporter M.L. Elrick's successful weekly podcast, "Soul of Detroit," is shrouded in mystery.

Elrick, who had been broadcasting since February on Drew Lane's Red Shovel Network podcast group, with his station's permission, abruptly announced last Friday on Facebook:

"It is with great regret that I write my podcast, ML's Soul of Detroit, is 'on pause' until further notice."

Elrick had been given green light to be part of Lane's podcast network by Fox 2 general manager Mike Renda, who retired in June. The first podcast was in February and was seen by the station as a way to help promote Elrick and itself.

Elrick, a Pulitzer Prize-winner who has worked for Fox 2 since 2012, referred Deadline Detroit to Fox 2 for comment on Tuesday. Greg Easterly, the affiliate's new general manager, has not returned a Tuesday call requesting a comment.

Some of Elrick's supporters responded to his Facebook post with dismay, and one went as far as as to speculate: "Conspiracy theory: the new boss is in cahoots with DTE. You exposed them and they're shutting you down. Seriously, I want to speak to whoever's in command."

The comment apparently refers to an Aug. 1 podcast titled "Fight the Power," in which Elrick talked about DTE's steep rate hikes and compared its record with other ulitities when it comes to restoring power. The utility advertises on Fox 2.

Peter Ternes, a DTE spokeman, said the energy company played no role in the decision to suspend the podcast. "We have not had any conversations with any media outlets regarding M.L. Elrick or his podcast," he said in a statement.

Elrick also did provocative podcasts on former Detroit Mayor Kwame Kilpatrick in June and August, and debated currrent mayoral chief of staff Alexis Wiley in April about a Free Press story on her boss, Mike Duggan.

Lane, a former sportscaster and WRIF-FM co-host with Mike Clark, issued a statement to Deadline Detroit on Tuesday:

"I spent a long time trying To get ML to do this and I knew it would be great. Then it took months to get through red tape to approve it with Fox 2. It was worth the wait. The 'Soul of Detroit' took off and 2 weeks ago 50,000 people downloaded it. 99.9 percent of all podcasts will NEVER do that! Marc Fellhauer and Sean Windsor have poured their hearts into this and the show also has picked up advertisers.

"My understanding is there’s a new sheriff at Fox 2 and ML has been asked to take a pause while Fox 2 decides whether this is Ok going forward. We all have to answer to someone and he has respectfully put on the brakes. After all the hard work, chemistry and hustle it took to get the 'Soul of Detroit' where it is, obviously this really hurts. I just hope we get it going again soon because this show has LEGS and gets better all the time. ML is an important voice in Detroit and hearing him in this format was fantastic.

"I’m really surprised by this!"