Louis Aguilar at The Detroit News may have found the perfect anecdote to illustrate the nuttiness of the real-estate market in Detroit, specifically near Corktown and the Ford Motor Co. transformation of the Michigan Central Station: 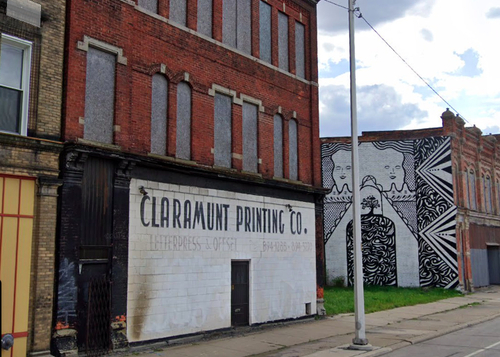 At street level, plywood. But probably not for much longer. (Photo: Google)

A long-empty storefront with a gaping hole above the front entrance sold twice in the same day. The first sale was for $350,000. The second was for $625,000.

"I did those transactions within minutes," said George Mugianis, who bought and flipped the property in March. The sale was for a pair of rundown buildings on the 3400 block of Michigan Avenue and an open lot behind them. Eight years ago, the same properties sold for $83,500.

... The sale is on a block of ragged structures that has attracted millions in speculative real estate dreams within the past two years. It highlights the fact that betting on Detroit development often means buying derelict property. The block is west of Corktown, past the Interstate 96 overpass, about a half-mile from the nearest trendy restaurant or $400,000 condominium.

Alan Greenspan once described the overheated stock market as "irrational exuberance." What's happening on Michigan Avenue between Dearborn and Detroit may or may not be irrational, but it's certainly optimistic. The buyer of the storefront with a hole is a company registered to Christos Moisides, a developer who has been around the derelict block often enough to know what's worth paying good money for.

Other projects underway or in development include lofts, retail spaces and performance venues. Is it a gold rush? Depends on whether you have enough gold to invest.