It's a solid marker of autumn, as colorful as hardy mums and as lively as a cider mill on a crisp Sunday.

Murals in the Market is back for a fifth year, with 31 local and visiting artists showing their creativity outdoors for a week in and around Eastern Market -- also the site of public festivities that start Saturday afternoon.

Starting a 1 p.m. Saturday at Division and Russell streets, two DJs and seven other acts entertain at an 11-hour block party that costs $20 (tickets, with $3.69 fee).

Other tie-in events are free, as is gawking at works-in-progress (map).

Some muralists will attend a meet-and-greet reception from 9 p.m. to midnight Sunday at Motor City Wine, 1949 Michigan Ave.

And for three hours next Monday evening, starting at 7 p.m., skateboarders are invited to a free "Skate Alley" behind Red Bull House of Art, at Orleans and Winder streets at the market area's southeastern end. It's the second year for this attraction, with ramps and other temporary installations by Derrick Dykas, 34, and his team at Community Push, a nonprofit group working to advance boarding locally. 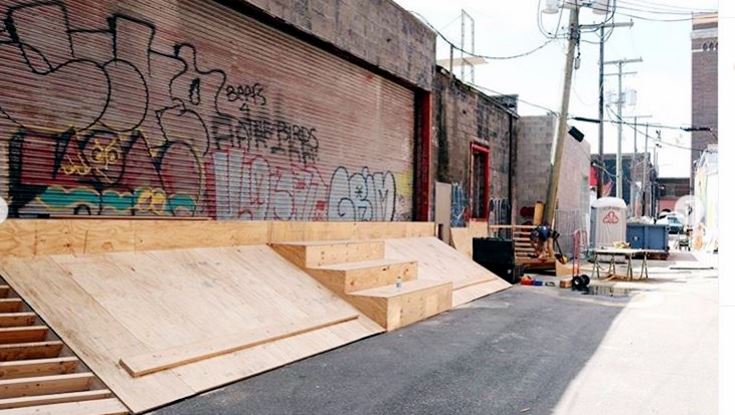 "Skate Alley" construction is under way this week off Orleans Street. (Photo: Instagram/Murals in the Market)