Detroit Officer's Kindness to Homeless Man Is Something to Savor

There are thousands of stories in the big city. This is one.

It begins with a rained-out ballgame and the sidewalk encounter above, which winds up on social media and spreads to two TV newscasts. A phone camera is involved, naturally.

Characters in the heartwarming downtown drama were strangers whose paths crossed after a downpour postponed the Tigers-Yankees game Wednesday night. They are Stanley Nelson, a 62-year-old unhoused Detroiter, Police Officer Jeremy Thomas and baseball fans Jill and Andy Schafer.

In an era when everyone can be a photojournalist, Jill Schafer heeded a solid intinct as she saw Thomas shaving Nelson's face. She snapped a couple of phone camera shots and posted them on Facebook around 9 p.m. with this reaction:

What a great Detroit cop!! This is right outside Comerica park. The game was a rainout but this officer went way above and beyond to help this man shave!!! 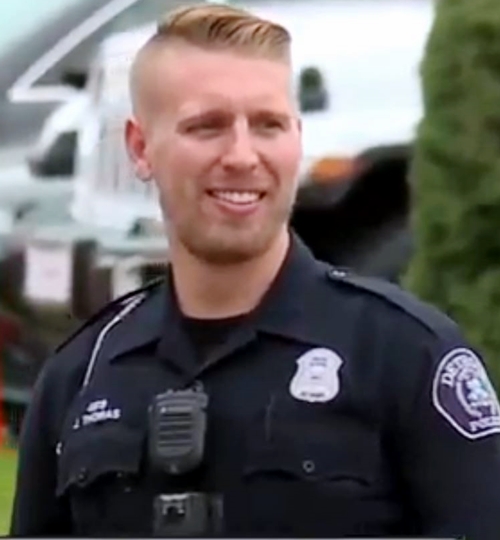 Jeremy Thomas: "This could be you at any day. Nobody is better than the other person."
(WXYZ screenshot)

Within minutes, friends suggested she change the post's status so they could share it. Not long after, Fox 2 News senior executive producer Debra Andrews got Schafer's OK to use the photos on her 11 p.m. newscast. (The half-minute segment on "an act of humanity" is here.)

Kimberly Craig of WXYZ takes the interaction to a big league level Thursday by talking with the officer and the beneficiary of his kindness. She includes background on why the officer, on the force since 2016, offered to help Nelson.

Each man shares an uplifting reflection on the value of person-to-person connections:

► Stanley Nelson: "That was beautiful what he did and God is gonna bless him for doing that for me because he didn't have to do that. . . . I really appreciate that because, you know, I'm going through my thing and I feel bad about myself, you know, but I'm gonna be alright."

► Jeremy Thomas: "Just know that this could be you at any day. Nobody is better than the other person. They may be in a better position in life, but use that opportunity to take care of somebody else when you can."