Deadline Detroit readers are invited to play a game with us. We're calling it, Is This Peak Mitch Albom?

The idea is to find a headline, a paragraph, a quote that demonstrates -- to mangle a quote from Lucy Van Pelt -- that of all the Mitch Alboms in the world, this is the Mitch Albomest.

Today, we have a contender. Behold: 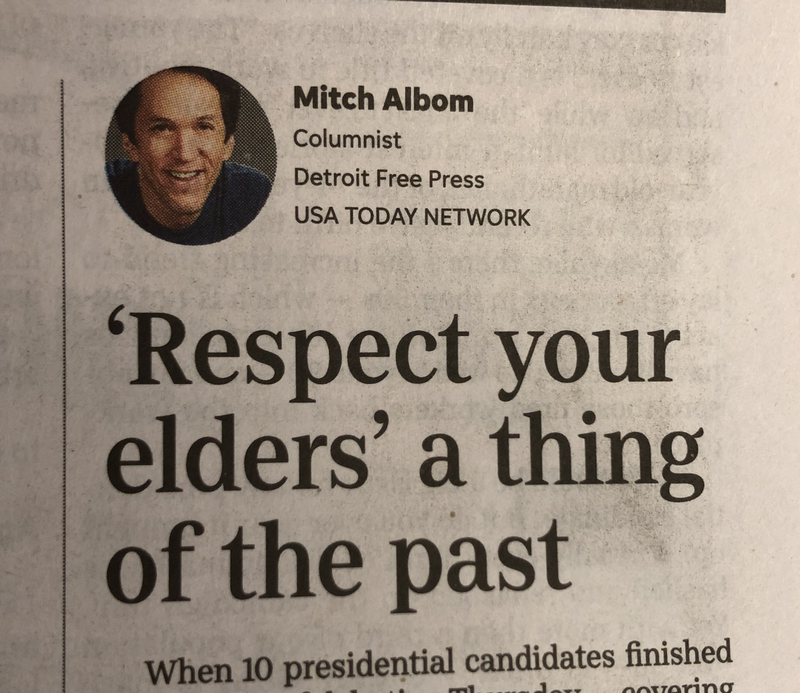 Only Albom, who yearns for a simpler time -- before the internet made it obvious how many people think his work is ridiculous, before them damn smartphones -- and the nation's foremost authority on heaven, can wring his hands over whether Julian Castro should have been more respectful to Joe Biden.

The insult came courtesy of Julian Castro, once the youngest member of Barack Obama’s cabinet, who, in a heated exchange, yelled at Biden, “Are you forgetting what you said two minutes ago?”

The crowd gasped. Pundits tweeted. The question was perceived as a whack at Biden’s age, which, at 76, exceeds Castro’s by 32 years.

Albom uses this incident -- an attack at a political debate, imagine that -- to launch into a tirade about how badly treated older people are. Projection much?

Why? Well, let’s face it. We live in a society that worships youth. Our entertainment chases teenage viewers (just count the comic-book movies). Advertisers have little interest in people over 50. Products to remove wrinkles or grey hair fly off the shelves. “The youngest to ever” is a coveted title in work, politics, and law, while “the oldest to ever” is usually reserved for human-interest stories, like an 80-year-old marathoner, or the 74-year-old Indian woman who recently gave birth to twins.

For a multi-millionaire said to be working on a network series based on his terrible first novel, you'd think he wouldn't be whining that comic-book movies are popular, but Mitch speaks for The People, so OK.

Elsewhere, in Realityville, smart columnists have long noted that respect for one's elders is the very bedrock upon which American social policy is built, judging from how many benefits accrue to those over 55 or so, from early-bird specials to senior discounts to those damn baby boomers who refuse to retire and make room for their overburdened children and grandchildren to get ahead in the world and start paying off the student loans their elders never had. Meanwhile, concepts like free preschool are derided as social engineering.

But you do you, Mitch! Meanwhile, why hasn't your column picture been updated in...man, it's been at least 15-20 years? Maybe a little gray coming in at the temples, hmm? Or more likely, based on more recent photos we've seen, you're visiting a colorist on the DL. So much for respecting age.