UAW members, still on the job, cross other members' picket lines in Flint

The United Auto Workers did not strike at midnight when their contract expires, but 850 janitorial workers represented by the UAW walked off the job at five plants. 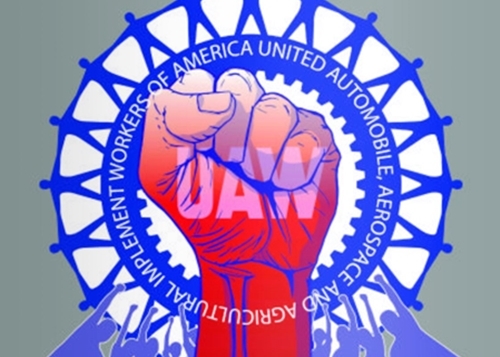 And today, in Flint, other UAW members crossed their picket lines.

"This isn't what solidarity looks like," one autoworker said as he dropped off food to the janitors before reporting for his shift, which started just before 7 a.m.

The autoworkers are General Motors employees and the UAW told them to report to work Sunday even though the union's contract with GM expired at 11:59 p.m. Saturday. The union's leadership was to meet later in the morning in Detroit to decide on next steps.

The janitors are employed by Aramark and represented by the UAW. They're contracted to provide services to three GM plants in Flint, one in Warren and another near Cleveland, Ohio.

Not all the members who crossed appeared happy about it, and one was near tears. The division was noted by those on the picket line:

"They've segregated us away from GM," said Jon Lyttle, 36, of Flint, one of the janitors. "We're one union. Everything should be done together. We're supposed to be brothers and sisters."

The janitors have been working without a contract since March 2018, and are striking for better pay and benefits.

Meanwhile, union leadership is said to be meeting Sunday to discuss next steps in their own contract issues.