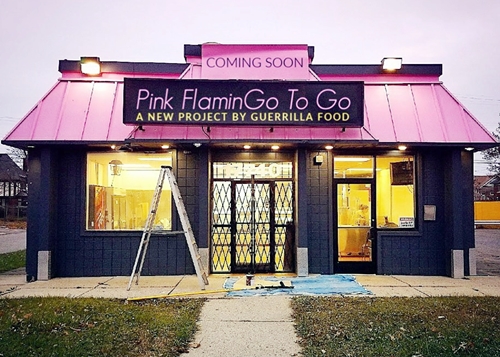 The work-in-progress newcomer on Woodward, north of McNichols. (Photos: Facebook)

Located near Palmer Park at 17740 Woodward Ave., the new quick-service restaurant will allow Pink Flamingo’s team to free itself from the constraints of Michigan winters and refocus on serving affordable, local food to the community all year. 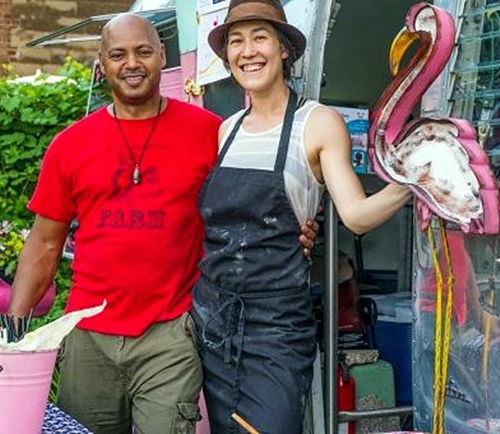 Founder Meiko Krishok, right, and Khalee, who uses one name.

The space is a former Bread Basket Deli 10 blocks north of McNichols Road, which Houck checks out:

The old deli has been repainted in matte black walls and a hot pink roof, while the restaurant’s interior is spotless with polished metal countertops and a large deli case. . . .

Pink Flamingo To-Go’s menu will consist of dishes similar to those served on the truck. The restaurant will offer a core list of items with recipes that can be easily tweaked to suit the produce that's in season.

Customers can expect options like grab-and-go salads, rice balls, and bowls with rotating grain, protein, and vegetable options. Soups, such as black-eyed peas and greens or vegetable curry, will be available hot by-the-cup as well as in chilled, quart sizes. There will also be a variety of desserts, including grab-and-go cake and haupia — a Hawaiian coconut pudding with seasonal fruit and a nut-based crust.

For breakfast, Pink Flamingo To-Go will serve yogurt cups with fruit compote and granola. Diners can also pick up drinks such as fresh lemonade, hibiscus tea, fruit smoothies and coffee.

Hours are 11 a.m. to 8 p.m. Saturday through Wednesday. That changes after the food truck’s last pop-up this season at 2746 Vermont St. in late October.

Another debut this week: