Unregulated Scooters in Detroit Cause Tension, Plus Broken Bones 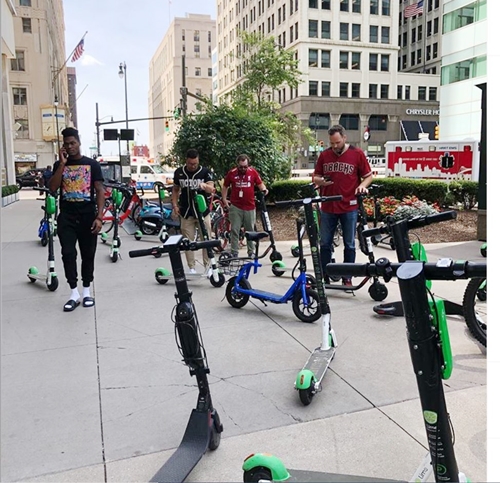 Scooter-mania has swept the country, including in Detroit where the downtown and Midtown sidewalks are often littered with them.

Michael Jackman writes in Bridge Magazine that unlike towns like Ann Arbor and Chattanooga, Tenn., Detroit virtually has no regulations, which has resulted in confusion, annoyance, anger and broken bones from mishaps.

"With everything going on in the world, why have I chosen to get so pissed off about scooters?” asks Kristin Palm, a Detroit resident and writer, who then tells Bridge:

“It’s the entitlement of the companies and the way they use our public space for profit and somehow get to forgo all the considerations the rest of us are rightly expected to observe, like keeping spaces clear for both aesthetic and safety reasons."

“At least there are rules of the road that cars generally follow,” said Mohamed, who occasionally uses a scooter himself.  “And, for the most part, both pedestrians and drivers have a common understanding what those rules are.

“I think with scooters we haven’t had time to come to a common understanding about those rules. Instead, the rules are ambiguous and that leaves lots of room for animosity between pedestrians and scooter users.”

In a related post Monday, Jackman looks at a bump in scooter-related ER visits:

“I don’t think people quite understand the level of injuries that can happen with this,” Klever said. “It’s not a matter if there’s going to be a death, it’s just a matter of time. Given the types of injuries and the pattern of injuries, it’s very clear to me it’s going to happen.”

On the upside, Mark de la Vergne, the city’s mobility chief, tells Bridge the companies are “really good partners” and “good at responding to issues we have.”

“This isn’t just a Detroit issue,” he said. “We’ve been trying to work with companies to improve technology so they are able to get the users to park the devices correctly.”