'Why I'm Rooting for the GM Strikers' -- NY Times Columnist

Most rational views tend to be arguably valid, leaving aside incoherent rants from Holocaust deniers, 9/11 truthers and similar wackos. 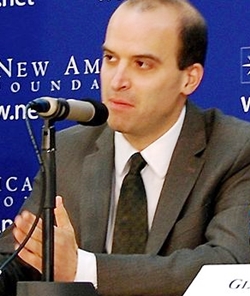 David Leonhardt: "The union's remaining leaders are trying to demonstrate a new willingness to fight for their members."
(Photo: Wikipedia)

That's why we share some of what's under the headline quoted in full above:

UAW leaders have recently been the subject of a corruption investigation, in which a few have been convicted of accepting bribes. In some cases, they took the bribes from employers in exchange for accepting concessions during contract talks. When the UAW narrowly lost an election to unionize workers at a Volkswagen plant in Tennessee this year, some workers said — understandably — that they voted against it because they were skeptical the union would really fight for their interests.

The GM strike is in part an effort by the union to halt this cycle of defeat. By calling the strike, the union's remaining leaders are trying to demonstrate a new willingness to fight for their members. . . .

The striking workers are asking for a pay increase and for the reopening of idled plants, among other things, and they are arguing that GM is now profitable enough (having earned $8.1 billion last year) to afford both. Given the wage stagnation that most workers have suffered in recent decades — and the larger import of the GM strike — I'm rooting for the workers to win a better deal.

I'm also rooting for the UAW to solve its corruption problem and make sure its leaders are looking out for the workers rather than themselves.