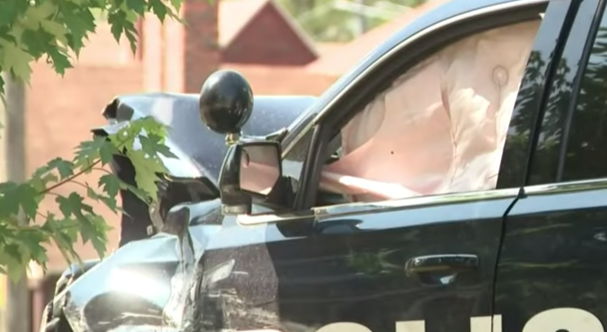 Everyone has fantasies, though they don't typically involve stealing a cop car.

An 18-minute video (below) posted by Real World Police in recent days shows a 24-year-old woman taking off in a marked Ferndale police SUV, a Chevrolet Tahoe, in July at 9 Mile and Woodward. She leads officers on a chase up the avenue, onto I-696 eastbound and I-75 southbound and into Detroit.

It ends at 7 Mile Road and Stoepel Street in Detroit when she rear-ends an occupied SUV and then hits a parked one. No one was seriously hurt, though the stolen car was traveling at 83 mph, police say.

The action is recorded on the swiped vehicle's dashboard camera, as well as those of three others that gave chase.

The drama began while police were talking to a man who was complaining that a cab driver took his luggage.

The video at the 1:35 mark shows the woman, Destiny Hawkins, 24, of Clinton Township, driving off with the car. Someone then tells the officer: "A lady got in your car, a cop car." The officer responds: "What?" Another patrol car speeds off northbound on Woodward in pursuit.

After the woman crashes, police approach the car. One officer asks if she's OK, to which she replies:

He then tells her to "get the fuck out of the car now." Police then put the driver, Destiny Hawkins, on the ground and arrest her on charges of auto theft and third-degree fleeing and eluding. The Department of Corrections shows that she's on probation until Aug. 15, 2022.