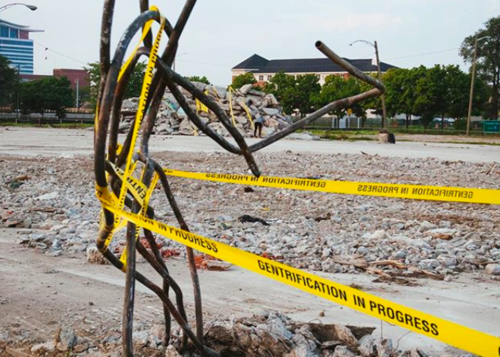 The remnants of a Detroit skatepark razed this week to make way for a $77 million condo development have been wrapped in caution tape warning "Gentrification in Progress."

It's the latest protest piece by artist Ann Lewis, who moved to Detroit from New York two years ago. Earlier this year she wrapped the Russell Street Deli in her signature tape when it announced it would close over a financial dispute with notorious Eastern Market landlord Sanford Nelson.

"Yet another place that grew out of people banding together, play, and a sense of community after being abandoned by a poorly run city has been bulldozed for profit," Lewis wrote in an Instagram post Saturday. "While I understand Detroit needs to get on its feet and get more property tax into the city coffers — I wonder how we can do this differently."

Set up by a nonprofit in 2014, the skatepark, The Wig, breathed new life into the vacant land surrounding the shuttered Wigle Recreation Center at Selden Street and the Lodge service drive. Its minders kept things neat and gave free skate lessons to kids.

"We made this place safe again," Community push founder Derrick Dykas told Metro Times in 2017. "When we came and started building, we were picking up dirty needles, condoms, and there were [school] kids that were right out here playing on recess while there's guys shooting up in the building next door. We got them out of here."

But the city owned the parcel, and in 2017 sold it to a developer for a reported $1.8 million. That developer is planning to build hundreds of residential units as part of Midtown West. Twenty percent will reportedly be designated affordable for people living at 50 percent of area median income, or $24,000 per year.

The city earlier this year opened a new skatepark along the riverfront. Dykas, who now works in they city's general services department, and others who skated at The Wig participated in the design process.

"This transition has been a very positive process," said general services director Brad Dick. "It’s not surprising that an artist who was not involved in that process doesn’t recognize that.”

In her post, Lewis also calls on the city to help the nonprofit secure land for a new skatepark in Midtown.

This week The Wig, a community skate park with basketball courts in @midtowndetroit, was bulldozed to make way for yet more condos. It was a city park that had been left to rot when @communitypush decided to revive it and create a skate park. The Wig was situated between two schools, both of which are now closed. It drew kids from all over the neighborhood, they’d wander up, hang out, meet new people, play basketball, and maybe even take up skating. The @cityofdetroit sold the park to developers and yet another place that grew out of people banding together, play, and a sense of community after being abandoned by a poorly run city has been bulldozed for profit. While I understand Detroit needs to get on its feet and get more property tax into the city coffers- I wonder how we can do this differently. Gentrification is a spectrum and there are solutions- but you won’t implement them if you don’t know what they are. With no plans or land on which to rebuild @communitypush, a grassroots band of skaters, deserves an opportunity and support from the city to do so. Not way down on the waterfront or in a different neighborhood but in midtown. They have a dog park- but no real human parks, playgrounds, or public basketball courts. If you’re going to destroy community spaces you must work with the folks you displace to thoughtfully rebuild them. The City of Detroit needs to do better.