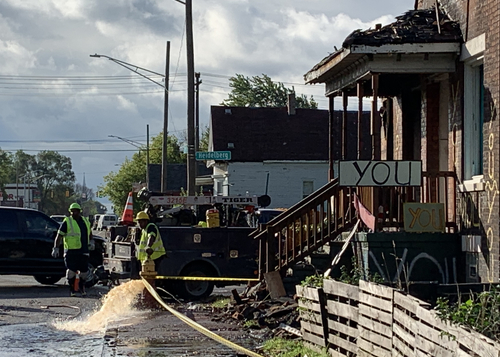 This is the ninth building to catch fire at the Heidelberg Project in recent years. (Photo: Michael Lucido)

Detroit authorities are investigating a fire that gutted the Heidelberg Project’s “You” house as possible arson.

No one was injured in the Monday morning fire. Media outlets report a person of interest is in custody,

WWJ’s Charlie Langton tweeted a video of officers handcuffing an unidentified woman at the scene.

#BREAKING Detroit Police have detained a woman suspected of being involved in the early morning fire at the Heidelberg Project. @WWJ950 @FOX2News @HeidelbergProj #MondayMorning pic.twitter.com/QIiWGt4B42

This is the ninth Heidelberg building that has caught fire in recent years. Eight buildings burned between 2013 and 2014, in what were also suspected arsons. No one was arrested.

The ongoing public art installation was created by Detroit native Tyree Guyton in 1986, and has been the subject of much controversy, spurring disputes with city hall and angering residents who don’t want their neighborhood to be a tourist attraction.

Firefighters had difficulty finding a working hydrant in the area, according to Fox 2 News.