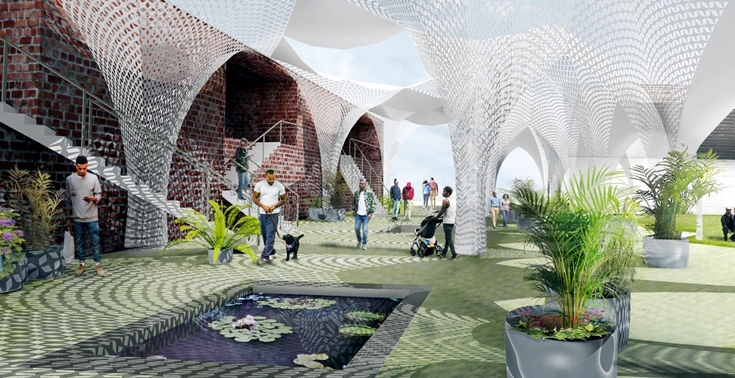 An early concept rendering of the distinctive project at Euclid and Oakland. (Illustration: The American Riad)

It was at a Moroccan-style riad, or community courtyard, marking completion of its first phase. 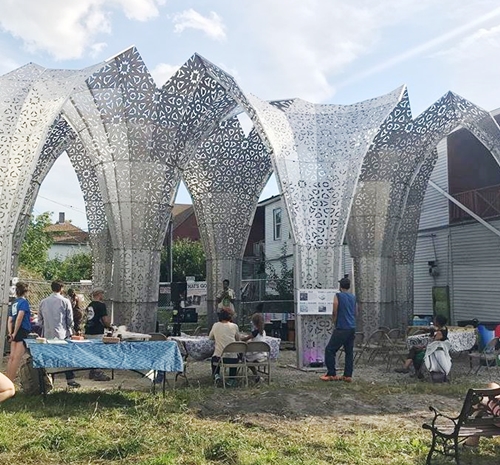 Visitors stood below stainless steel arches cut with Islamic patterns. The towering series of arabesques create a public space for art shows, performances, workshops and a garden. The next goal is to add vegetable plants, a fountain, "sculptural furniture" and food preparation capability by 2021.

This imaginative project began in 2016 when a nonprofit group – Oakland Avenue Artists Coalition – allied with an international art project called the Ghana ThinkTank. That global collective, founded in 2006, says it "develops the first world by flipping traditional power dynamics, asking the 'third world' to intervene into the lives of the people living in the so-called 'developed' world."

The two organizers received a $135,000 grant from the Knight Arts Challenge in October 2017 and added nearly $55,000 last year from 262 donors at Pantronicity. The Michigan Economic Development Corp. matched the public gifts.

Collaborators also include the Central Detroit Christian Community Development Corporation and North End Woodward Community Organization. They enlisted Syrian architect Marwa Al-Sabouni, a TED Fellow, as the designer and brought three members of a Morocco ThinkTank group to Detroit in 2017 "to advise us on how to convert the site into a riad and give classes on wood carving."

► Update: "It is my honor to be part of this cultural dialogue through Islamic architecture," Al-Sabouni says Tuesday in a tweet with a link to this article. 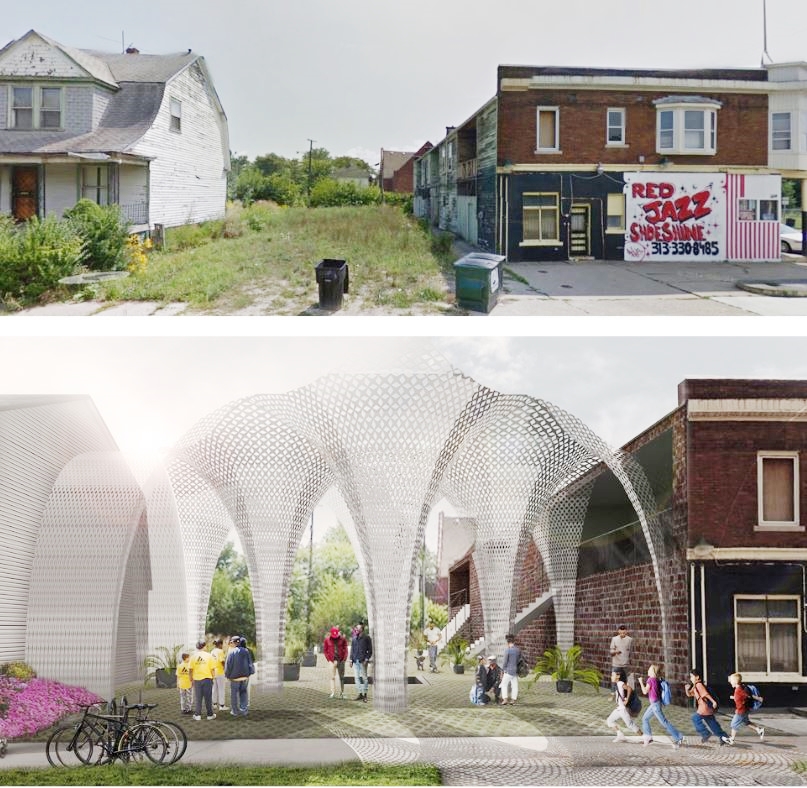 Photo and illustration show the original site and its redevlopment vision.
(Graphic: The American Riad)

"We are developing an alternative model of community development that can be shared with other communities struggling with the consequences of unbridled gentrification,” says the project's Patronicity page. "The American Riad brings together visionary artists from the Muslim world, who have come up with creative solutions for their own communities, to work with North End Detroiters to rebuild theirs."

To prevent gentrification and displacement, after the sculpture courtyard is built, Central Detroit Christian CDC will work with North End Woodward Community Organization to develop the surrounding buildings as affordable housing, guaranteed in perpetuity through the legal and financial protections of a land trust and equity co-op.

One consultant, Ghana ThinkTank artist John Ewing of Roxbury, Mass., says the venture is partly aimed at "encouraging Americans to learn from Islamic culture rather than fear it." He's quoted this month at Creative Capital, a New York-based funder of arts installations and similar projects. He also describes how visiting collaborators worked to overcome "mistrust towards outsiders with resources."

“There was a history of groups coming in with noble ideas and taking advantage of low real estate prices, experimenting on Detroit, using it as a playground of sorts but then abandoning ship at a certain point, leaving the mess for local residents to deal with or using them as props. It was years of getting to know people and developing trust and finding common ground before we were able to make real progress." 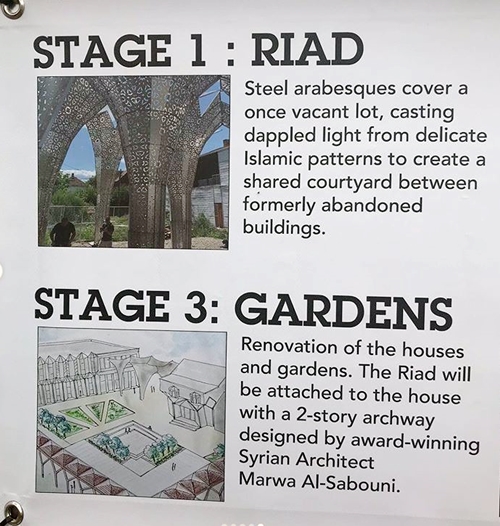 By virtue of its collaborative design and construction process, it aims to serve as an example of a Detroit revitalization project that’s not backed by big budgets or commercial investments, but by local artists, nonprofits, volunteers, and established residents instead to keep it authentic, local and socially inclusive.

Waraniak wrote this summer that the "American Riad collective of artists, designers and nonprofits has also worked with the Detroit Land Bank to secure the two properties adjacent to the courtyard lot: an abandoned house [920 E. Euclid St.] and a mixed-use development that’s currently home to the North End’s oldest business, Red Jazz Shoe Shine Parlor" at 9148 Oakland Ave.

In the Creative Capital interview, Ewing of Ghana ThinkTank notes: "Keeping these homes and giving them a new life is a really important aspect of the project for us."