A three-day-old criminal investigation in Auburn Hills is potentially serious, no question. But a police appeal for information brings ridicule and humor because the uncharged target's face isn't shown. 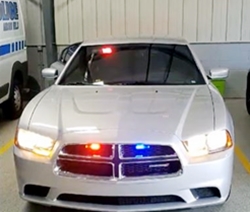 The case began Tuesday morning on I-75 near Lapeer Road when one of the Oakland suburb's officers stopped a northbound driver "for improper window tint and suspicious LED lights in the windows," says a Facebook post with a video of the police-like red and blue flashers.

The driver, a 37-year-old man from Flat Rock, was operating a silver 2012 Dodge Charger. During the traffic stop the police officer observed a laptop computer mounted in the vehicle’s center console and a loss prevention badge next to it.

The driver was arrested when a check showed "a suspended license and numerous traffic-related warrants," the post adds. Then things got more interesting:

A search of the vehicle revealed a black Glock-style BB gun, bulletproof-style vest with police patches on it and pepper spray. On the front of the vest there was a patch which states, "Michigan Police Attorney General." 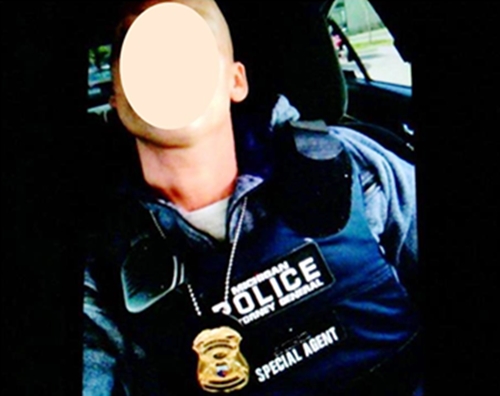 The Charger, which also had a working siren, was seized and Auburn Hills detectives went on social media Thursday "to share this information with the public and determine if anyone has had any encounters with this person on the road."

"This person has not been formally charged or arraigned at this time. By law, his name and image cannot be released until he is arraigned," a follow-up post explains after teasing, mocking and puzzlement.

Samples from a thread with nearlky 300 comments:

► "How was he driving without a face?" -- Sylvia Taylor, Detroit

► "If it's against the law for you to release a photo of him, then don't. But asking people to identify him based on THIS, is just silly." -- Jon Hintz

► "How you gonna ask if we know him when you block out his face?" -- Spencer Ferro, Auburn Hills

► "How does that narrow it down? The man with the blotted-out face tried to arrest me? . . . This almost seems like a joke." -- Curtis Hehn, Davison [two replies]