The auto workers, who met at a GM plant in Tennessee, visited Local 1853 coworkers outside the factory after exchanging vows in a backyard ceremony. He's originally from Flint. 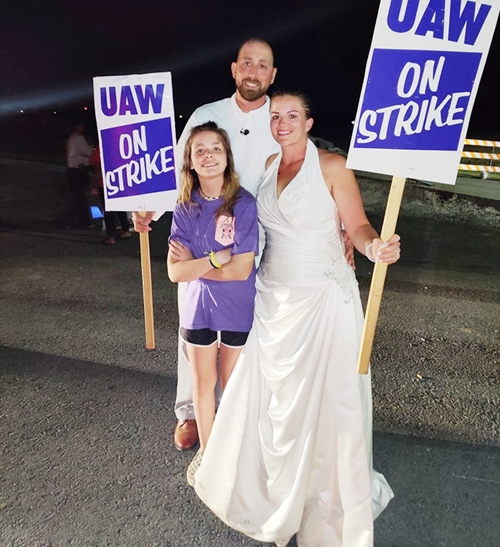 Steve and LaCrystal Ferguson pose on their wedding night with one of her daughters. (Photo: Facebook)

After her Sept. 21 wedding to a fellow autoworker, the new bride put down her bouquet and picked up a picket sign.

LaCrystal Robertson, 27, and Steve Ferguson, 37, were still in their formal wedding wear when they joined their fellow employees outside the north gate of the General Motors plant in Spring Hill, Tenn., for what was then the sixth day of the United Auto Workers’ nationwide strike. . . .

"Just because it's our special day, we're not forgetting about what we’re fighting for," Ferguson tells the paper Friday. The ex-Michiganian is a third generation auto worker.

Last weekend's wedding night plant gate stop was his second visit of the day. "I did my four-hour strike duty from 4 a.m. to 8 a.m. that day," he says to Post reporter Kim Bellware.

Ferguson moved with his family from Flint to Spring Hill in 1990 when his father was hired to work at the plant, first opened by Saturn Corp.