A 15-minute lark in Auburn Hills is drawing wide attention and a police search for two young men who broke into a roadside control room for an I-75 billboard last weekend and loaded oral sex scenes onto the screen.

Priya Mann reports on the case for WDIV:

Auburn Hills police said the two people in the picture [below] broke into the shack at 10:49 p.m. Saturday, just before drivers reported an electronic billboard on the east side of I-75 south of M-59 was showing a pornographic video.

"In this particular incident, we had a local billboard basically run by a system onsite that is not staffed, which creates the perfect storm for someone to access it," Auburn Hills police Lt. Ryan Gagnon said. 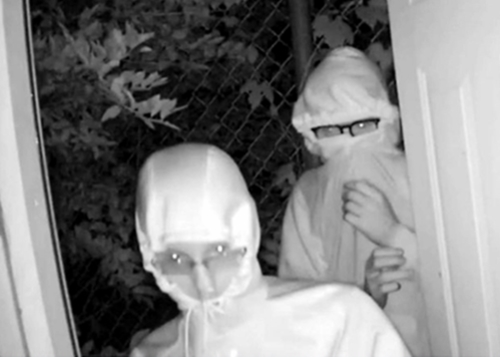 "We want to seek the public's help in identifying these two people . . . What turned out to be maybe a prank became a little more serious by breaking into a building."

We are requesting the public's assistance in trying to identify the suspects responsible for this crime. If you have any information related to this case, we ask that you please contact the Auburn Hills Police Department at (248) 364-9460.

Billboards can be eye-catching, but this one stood out like no other.

Auburn Hills Police are investigating how a graphic oral sex video played on an electronic billboard Saturday night. They want to know if someone hacked into the system.

The video was on a billboard on I-75 near M-59 for a short time, reports WDIV's Priya Mann.

McMahon didn't call police, but others did. Police contacted the billboard owner, who removed the images within 30 minutes.