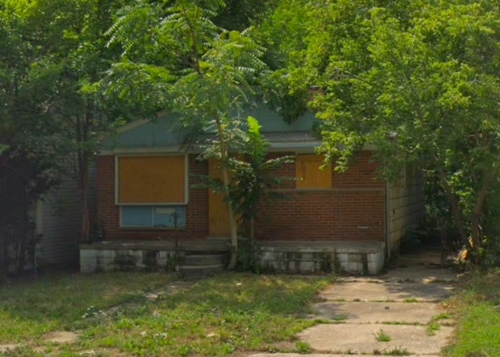 The house in Brightmoor, back when it was still standing in August 2018.

State Rep. Sherry Gay-Dagnogo's Brightmoor house wasn't on the demolition list. There was no demolition permit pulled for it. And yet, last week, Gay-Dagnogo (D-Detroit) was informed the house had been torn down, leaving behind just a gaping hole with an orange fence around it.

WDIV first reported on the mysterious demolition Friday. The station said Gay-Dagnogo's nonprofit had purchased the house to give to a family at Christmastime.

Today, the Free Press attempts to get to the bottom of the whodunit. The home — which a neighbor says disappeared in the few hours she was out — was next to one demolished this summer by demo contractor Adamo. That home had caught fire and wound up on the city's emergency demolition list. The fire also reportedly charred part of Gay-Dagnogo's house.

Google Street View imagery from 2018 shows the small house boarded and obscured by tall trees. The nonprofit had purchased it for $1,000 from the Land Bank with plans to fix it up.

The Freep notes that Adamo demolished the wrong house in a separate incident in May 2018.

But Adamo tells the Freep they didn't touch the house at 14567 Minock.

The company's attorney, Christian Hauser ... said his client has a photo of the house still standing on July 30 when they performed a site visit after demolishing the home next door.

"My client indicated they would never go back and knock down another house like that just randomly," Hauser said.

The city says it never ordered the demolition.

And so, the mystery continues. It's being investigated by the Detroit Building Authority.