A one-time allocation of $400 million isn't enough to fix Michigan's damn roads, the governor says -- in effect -- as she signs 16 Republican-led budget bills. 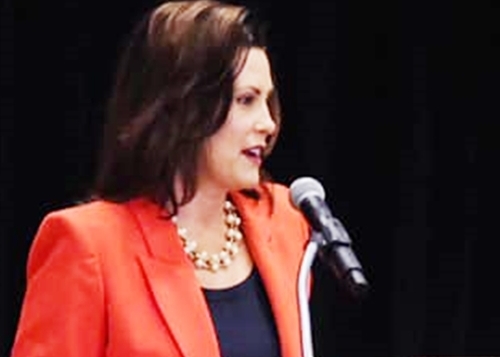 Gov. Gretchen Whitmer: "Line item vetoes can only clean up so much of this mess." (Photo: Facebook)

That includes $375 million in one-time General Fund infrastructure spending and $128 million in what she called "pork barrel spending" within the $15.2 billion School Aid budget that funds K-12 schools. . . .

While Whitmer ran on "fixing the damn roads," she’s advocated for a 45-cent gas tax hike as her preferred method for a long-term solution. . . . Republicans instead shifted $400 million into roads in their transportation budget. One-time funding, Whitmer argues, won't solve the $2.5-billion annual problem.

Manes notes that Whitmer apparently "plans to tap into the rarely-used State Administrative Board, which meets Tuesday morning, as a means of shifting money within state departments to more closely align with her spending priorities." The governor alludes to that in a brief video tweeted Monday night.

"While line item vetoes can only clean up so much of this mess," she says in the message below, "additional steps will be needed to protect Michiganders, protect access to health care and help close the skills gap."

Whitmer's communications director explains that ruler she holds: "Fun fact: line item vetoes must be made by hand with a ruler, and are initialed by the governor," he tweets.