Chris Southern, newly hired winemaker for Detroit Vineyards, came to the job from San Luis Obispo, Calif., and no, he’s not having culture shock. It’s true that Detroit Vineyards is a winemaker very, very different from those in California; to get to the tasting room, you drive not alongside picturesque vineyards heavy with late-season fruit, but on Gratiot Avenue near Eastern Market. That’s just for starters. But Southern grew up in Rochester, so none of this was unexpected. 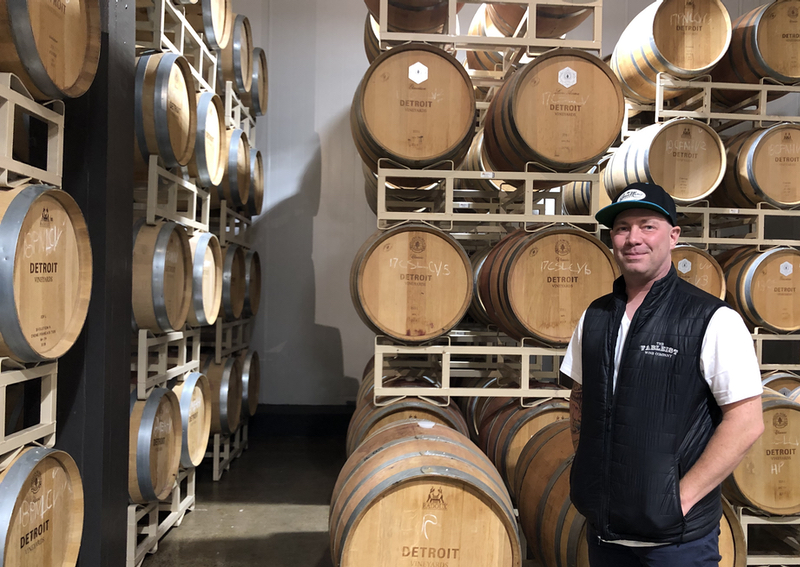 Located in the former Stroh ice cream plant, the doors open onto a sleek, newly renovated space in a familiar style: Detroit Post-Industrial, with polished concrete floors, sleek modern lighting and watch-us-work windows that offer a view into the space behind the locked doors, where Michigan-grown grapes are in the process of becoming Detroit-made wine.

Southern, 38, sat down with Deadline Detroit for a talk about the new business and winemaking in general, a process he described as a combination of “chemistry, microbiology and a little voodoo.”

This conversation has been edited for clarity and brevity.

How did you get your start as a winemaker?

I have a bachelor's in oenology from Cal Poly (California Polytechnic State University). You can actually go to school for this. The viticulture program is really good there. It's a bachelor’s in wine and viticulture with a concentration in oenology.

So that would cover everything from the growing of the grapes to how they're processed, and?

There's a business function, too, so it's interdisciplinary. Winemaking in California is a $500 billion industry, easily.

Did you always know you wanted to be a winemaker?

Nope. That's an accident. In 2008, I was getting divorced and my friends were all moving to the west coast and I just hated life and I wanted to go back to school. I worked for Trader Joe's for 11 years, and decided I was going to do urban agriculture, so I was looking at all these sustainable urban ag programs. I applied in oenology thinking I’m never going to get in anyway and so it won't matter.

And then I got into two colleges in Michigan and Cal Poly. So I sold all my shit, went to California. I thought, you know, what's the worst that could happen? 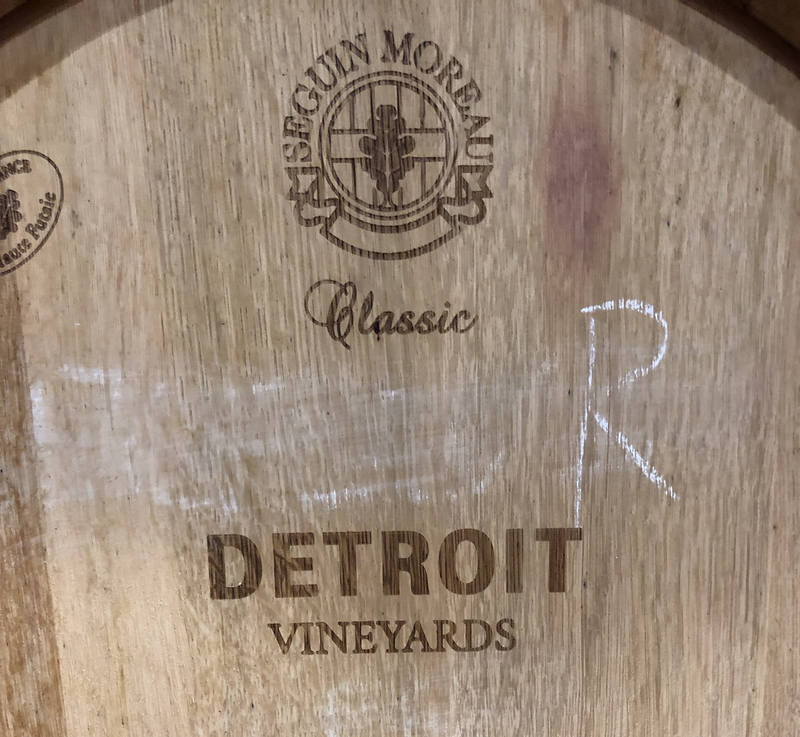 You've been at Detroit Vineyards since they opened in May?

No, I started September 9th. The project itself started around 2015. But it took (a while) to acquire this building. We only opened the tasting room in May. So it’s very much a startup.

I know you have local roots, but to leave a winemaking Mecca for Detroit sounds like you have a successful Hollywood career and what you really want to do is make movies in West Virginia. What made you decide to come back?

I think a lot of it was just timing, you know? I had a few things not go well, and I was very burnt out. And I was a little homesick. So this job presents an opportunity. Financially it makes more sense. This is also not a job that would be offered in California. It's a leapfrog in a lot of ways. But it's also the opportunity to create a little legacy. Like if we actually execute this well and we do something cool, I can be a hand in that.

Detroit’s a great place, if you like, you know, ethnicity, music, food and any of that. The central coast (of California) is very white. You eat avocado toast and listen to folk music.

It's a little more creative oxygen (here) in the atmosphere in general, rather than just in the wine industry?

I think it'll be good to have at least a break from having what you do be who you are. I mean, you're very associated with whoever you work for, what brand you make in California and in the wine industry. And you can lose sense of yourself in it. Cause you're not Chris Southern anymore. You're Chris that works at Fableist or Sans Leige or Tin City.

When I was thinking about this interview, I kept thinking about that scene in “Sideways,” where Virginia Madsen talks about what she loves about wine. She thinks about what was happening the year it was grown and what were the people doing? Did it rain and did the sun shine, all the stuff that makes it sound almost like alchemy. What is really involved in making wine from the time you crush the grapes to when you pull the cork?

Depending on what you're making, there's a whole life cycle before the grapes come into the winery. And that certainly plays an important role. But once the grapes come in, you're just kind of tending to them. Wine is a product of fermentation, like cider or whatever. You introduce yeast, they eat the sugar, they create alcohol. And carbon dioxide. So you either let the carbon dioxide go or you bottle it and you get champagne. You’re inoculating with yeast or maybe you're letting native yeast do it. You're making sure that you feed the yeast so that they don't make off flavors, which will happen.

If it's a red wine, you’re taking the wine through its secondary fermentation, which is bacterial, we call it ML, malolactic bacteria, they make lactic acid. So you soften the wine a little bit. And then you're making sure that the barrels are topped, there's no oxygen touching the wine. Oxygen can let wine become vinegar, or it can feed other bacteria or yeast that would eat the component parts of the wine and make all kinds of other weird stuff that you don't want.

It's really a food science. It's a lot of dragging hoses around and spraying stuff off and driving a forklift. I think a lot of what you see on TV is bullshit. It's a pretty dirty job and you're sticky.

Where did the grapes come from that you guys are using?

Pretty much everything that we're using right now is from southwestern Michigan and the Traverse City area.

So what is great or good or distinctive about Michigan grapes?

When you're making wine, you're expressing a site, a place, whatever that might be. I think part of the problem with Michigan is that people have tried to emulate other regions. You can't really grow Cabernet Sauvignon super well here. People try and sometimes it works, a lot of times it doesn't. Now we can grow Riesling really well. We can make a great Riesling. It's just harder to market and sell. We can do Pinot OK here, we can do Chardonnay fine, but they're not going to taste like California wines. And so I think it's more of a marketing and branding issue than anything else. They're not better or worse. They're different.

I want to focus on those things that are good that we do well. 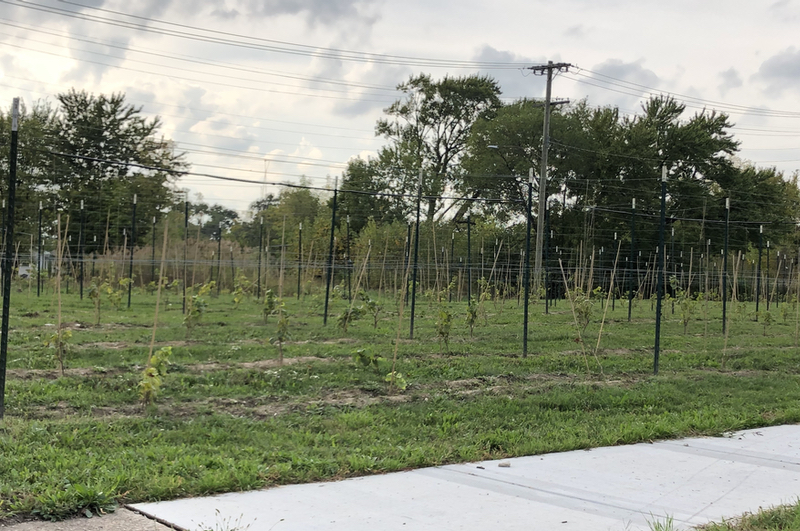 An embryonic vineyard on Detroit's east side

What are you drinking there?

Is the harvest in for this year?

We have fruit in the winery now and we will get more next week and the week after and then reds are going to be late, so in November I would say.

Winemakers talk about what's a good year and what's a bad year. Do you expect this to be a good year, or do you not know until the wine’s made?

The definition is different here than it is in California. Like we're very precious in California about a good year and a bad year. In California, 2018 was a unicorn vintage. The quality, along with the amount of grapes that were available at the price points they were, I've never seen.

In Michigan you have more swings. Last year we had a polar vortex. That's not great. We're dealing with issues of vine kill, cause winter hardiness can be an issue in (winemaking) grapes especially. We have delayed bud break, et cetera. I think from what I've seen thus far, I think the quality's fine. I think probably as good as we could expect, given last winter. I think this is going to be a fine year. I don't think it'll be banner.

The dry Riesling is really good.

What are your plans for this place going forward?

I think we're going to improve the winemaking. We are actively involved in planting vineyards in the city. We have one at Mack and Beaconsfield, in Morningside. It'll be two more years before we'll pull a crop. And then looking into next year we're going to be working with Eastern Market Corp. They may have some acreage for us.

We have a ton of opportunity. We can make everything else here. Why can't we make wine?