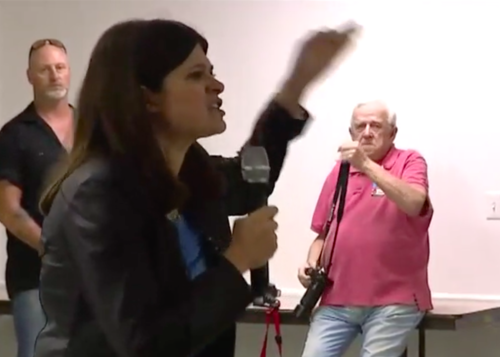 "This is why the NRA has got to go," Stevens shouted. (Photo: Fox 2 video)

An attempt by area Democrats to find commonground with the pro-gun crowd backfired yesterday in Commerce Township.

The goal of the anti-gun violence townhall led by Rep. Haley Stevens (D-Rochester Hills) was plain: rally support for measures Americans on both sides of the political aisle tend to support, like universal backgrfound checks and a ban on semi-automatic rifles. But the venue for the discussion was somewhat surprising: Fems for Dems, the organization behind it, opted for the Multi Lakes Conservation Association, which has shooting ranges on its grounds.

The Congressional district's Republican organization caught wind of what was going on, and showed up in force. Video of the event showed people wearing Trump hats and holding Trump signs. At least one attendee was open carrying.

That all led to a good deal of shouting. According to The Detroit News:

Stevens, Michigan House Democratic Leader Christine Greig and State Rep. Robert Wittenberg were often drowned out and interrupted by protesters at the gun club, some of whom repeatedly shouted "NRA" in reference to the National Rifle Association.

An estimated 200 people filled the conservation association building. ... Some carried signs with messages such as "Vote out Haley Stevens — a liar."

Earlier Tuesday, Meshawn Maddock, chair of the 11th Congressional District Republican Committee, had issued a statement saying many people would oppose Stevens and "holding a town hall to protest our Second Amendment in this District is a mistake.”

According to Fox 2, the meeting had to be cut short. Maddock accused the group hosting Stevens of lying to booking the venue. She claims they called themselves "Fems for Life."