Michael James of The Tribe Sports has spent more than 20 years in sports journalism at The Detroit News, New York Daily News and ESPN. This column is republished with permission. 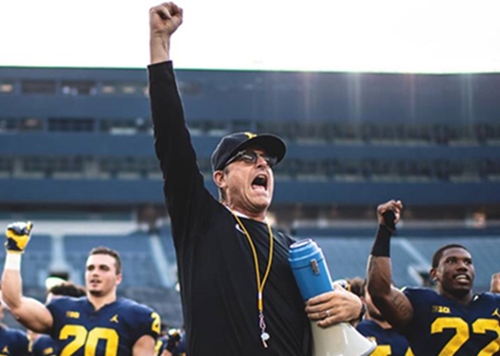 After Michigan got thrashed by Wisconsin several weeks ago, there was little doubt that Michigan’s season – and possibly the end of Jim Harbaugh’s career in Ann Arbor – hung in the balance when the Iowa Hawkeyes came to town.

Wolverines fans had a right to be worried.

But after the Wolverines quickly took a 10-0 lead on the higher-ranked Hawkeyes early in the first quarter at Michigan Stadium, the hometown fans really shouldn’t have been nervous or filled with stress the rest of the way.

Yet, they were, biting their nails down to the final minute in a game that should have been a rout.

Why? Because despite most of the college football world declaring that Michigan has the right players and pieces to make a run at a Big Ten title and national championship, Jim Harbaugh refuses to allow his team to reach its potential.

How, you ask? Because Harbaugh refuses to see what everybody else does: Quarterback Shea Patterson, the most important man on the roster, is not the right player to get them there.

Aside from accounting for four touchdowns a week earlier against Rutgers, also known as Little Sisters of the Poor, Patterson rarely provides the spark, leadership, accuracy or ball security that the position requires.

In other words, he rarely seizes the moment.

In an unnecessary slugfest against the Hawkeyes, Patterson had a golden opportunity to score a touchdown following a first quarter fumble that gave Michigan a first down inside Iowa’s 20.

On first down, Patterson missed Tarik Black in the end zone. After a six yard run on second down, Patterson completed a 2-yard pass on third and four. Michigan settled for a field goal, leaving four points on the field.

This came after a near interception to start the game, followed by a bad overthrow and underthrow to kill the first drive.

Later, in the fourth quarter – in a game that included a missed 58-yard field goal attempt and a chip shot – Patterson got the ball back with 2:43 remaining, needing only a first down to ice the game. Instead, Michigan held the ball little more than a minute, its three-and-out culminating with Patterson being stopped after a four yard run on a third-and-six to the Michigan 23. The result was Iowa getting yet another chance to tie the game with a possession starting at its own 43 with 1:35 to play.

Fortunately for the Wolverines, their defense – which forced four turnovers (three interceptions and a fumble) and had eight sacks – came to the rescue again and killed Iowa’s final hope.

It never should have come to that.

To be sure, not all of Michigan’s offensive struggles can be laid at Patterson’s feet. There were dropped passes and some downright unimaginative calls made by offensive coordinator Josh Gattis, and Patterson can’t force his receivers to run a 5-yard pattern when the team needs four. But Patterson’s hesitancy in the pocket, his unwillingness to run when necessary and his chronic inaccuracy are a constant problem.

The Talent Is There

That reason is this: Every single team that has been fielded by Jim Harbaugh since he’s been at Michigan has been better than he’s allowed it to be.

The athletes are there. The talent is there. The will and the energy is there. Everything that Michigan needs to be a perennial contender for the Big Ten championship and in the conversation for the national title is there.

The only thing missing is the man at the top who can lead the Wolverines to the top of the mountain.

Somewhere along the line, the quarterback whisperer, offensive innovator and fiery, inspirational personality that the Michigan brass thought they were getting in Harbaugh back in 2015 got switched. In his place is a stubborn, mercurial, conservative figure who appears to accept defeat in a way that his mentor, the great Bo Schembechler, never did – not even when Bo’s teams began to lose.

To be honest, a 43-15 record isn’t bad at most places. It’s certainly not a cause for one to consider firing the head coach. But the thing is, Michigan isn’t just any place. It isn’t just any team.

The Michigan Wolverines are supposed to be one of the premier programs in the entire country – and they often appear to be – only they never seem to be as inspired as they need to be in the biggest games. And they never appear to play as well as they should or be as dominant as they actually are – which falls on Jim Harbaugh.

Several years ago, Harbaugh allowed quarterback John O’Korn to doom Michigan, refusing to listen to almost every major college football analyst in the country, most of whom unanimously agreed that quarterback was the sole weakness of the Wolverines. Yet, Harbaugh stubbornly stuck with O’Korn and essentially allowed his poor play to foil the team.

While Shea Patterson is by no means as bad as O’Korn was, it’s clear to anybody with eyes that the Patterson experiment simply isn’t working out. There is no leadership. No spark. No game feel or intelligence. There is simply nothing fans see week-in and week-out which justifies Patterson being the unquestioned offensive leader of these Michigan Wolverines.

Still, week after week, Harbaugh continues to trot Patterson out as Michigan’s best chance for victory. Against Iowa, one can easily argue, Patterson was the primary reason Michigan was ever in position to actually lose the game.

At the final gun, you breathed a sigh of relief in a game which should have never been in doubt. You felt that the Wolverines, once again, won the game in spite of Jim Harbaugh’s best efforts at trying to lose it.

The problem is this: Jim Harbaugh simply won’t allow the Michigan Wolverines to be be as good as they actually are.