The secret is out: Latido at Joebar in Hazel Park serves the one of the best Cuban sandwiches north of Miami. 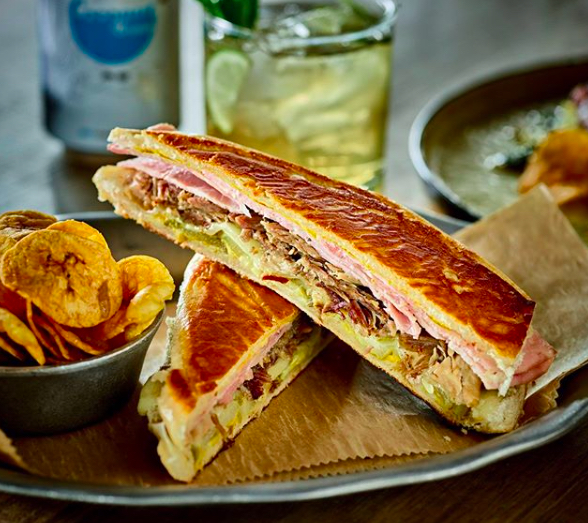 "One of the best damned Cuban sandwiches north of Miami." (Photo: Latido Instagram)

In another review likely to send a line out the door at a restaurant this weekend, Freep food writer Mark Kurlyandchik delivers a near-rave of the pan-Latin menu at Latido, a long-term residency at Joebar. That's the Hazel Park spot on John R that also serves as a waiting room for Mabel Gray next door and encompasses frame, a pop-up space behind a hidden door.

With a casual vibe but a surprising menu, Latido satisfies, Kurlyandchik writes:

Latido's menu at times hews to traditional preparations of Central and South American foods, but the breakfast sandwich was created out of the need for an egg sandwich. A fried egg and thick slabs of smoked bacon are teamed with housemade pimento cheese inflected with Peruvian aji rocoto chile paste, all topped with salsa criolla — a vinegary red-onion salad also with Peruvian origins -- on top of a crispy roll from Golden Wheat Bakery. Every mouthful explodes with flavor, the fresh and tangy salsa criolla counter-punching the fat from the rest of the sandwich.

Panamanian corn fritters called torrejitas were another surprise, sent out by accident the first time I tried them and then ordered with gusto on every subsequent visit. At Latido they look like large, craggly hush puppies, but their interior reveals a steaming, airy corn dough studded with a few sweet kernels. They're served with habanero butter that contains the distinct fruit notes of habaneros but not much of the heat. This is side-of-the-road food in Central America but it translates pretty deftly to a blue-collar American bar.

About his only complaint was the atmosphere, especially when diners are arriving for a frame event, and "can feel like second-class citizens participating in a supporting act for the buzzy event behind the false wall."

The residency of chef Michael Barrera was supposed to last just a year, which will end in December or January. Yet Latido will live on, somehow. But if you want to experience it in Hazel Park, you should probably make a reservation.

(Joebar owner Joe Vaughn is a commercial photographer, and the Latido Instagram does not disappoint.)