A past MSU Athletic Department employee's attorney can question football coach Mark Dantonio for up to seven hours in a wrongful dismissal case, a judge says. 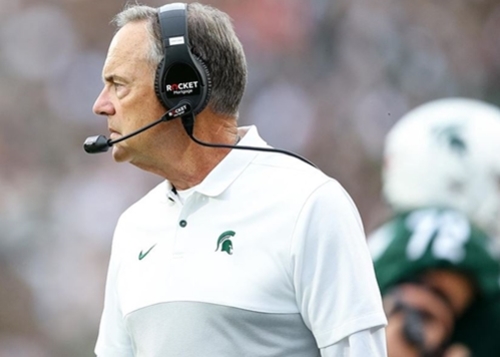 An Ingham County judge ruled Tuesday that Dantonio "must participate in a seven-hour deposition with no questions off-limits," Carolyn Clifford reports at WXYZ. The deposition by attorney Thomas Warnicke of Beverly Hills can wait until after MSU's season ends Nov. 30.

Blackwell's contract wasn't renewed after police said he interfered with a 2017 investigation into rape allegations involving three players. (The trio — Josh King, Donnie Corley and Demetric Vance — were kicked off the team after being charged with sexually assaulting a woman at the party. They pleaded guilty to reduced charges of seduction and were sentenced to 36 months probation.)

In deposition testimony released last month, the ex-employee said several MSU assistant coaches advised Dantonio not to sign a recruit with a history of criminal allegations. Dantonio, Blackwell alleges, brought the player in anyway. A year later, he was charged and ultimately convicted of raping an MSU student.

Dantonio's attorney, Thomas Kienbaum of Birmingham, told WXYZ last month: "Coach Dantonio has been more than willing to testify and explain the reasons he decided to not further extend Mr. Blackwell’s contract. This could have been accomplished months earlier, before the onset of the football season, and dates were provided but not accepted by Mr. Blackwell’s counsel."