Can You Tell a Goose from an Eagle? 2 Wayne County Hunters Say They Couldn't

The field shots were accurate, but the target identification wasn't.

Now a pair of Metro Detroit waterfowl hunters are in a possible legal jam for shooting an eagle they thought was a goose. 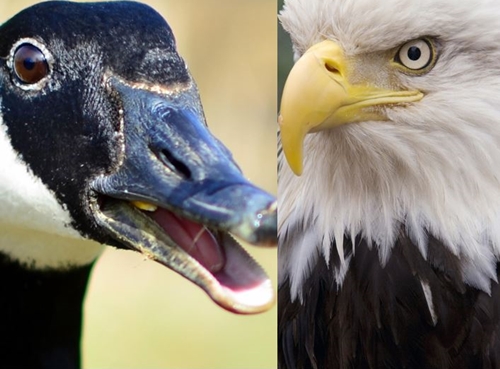 It's illegal to kill the one on the right.

The Detroit Free Press tells what went down last weekend:

A 53-year-old and a 24-year-old shot the 2-year-old female eagle Saturday in a wooded area near the Bear Creek access site on the Manistee River in western Michigan in Brown Township. Fishing guides immediately reported the incident to the DNR. . . .

Two guides said they saw the eagle flying, heard a gunshot ring out and then saw the bird falling from the sky. They saw the two suspects about 100 yards away, picking up decoys from the ground. One of the guides approached a suspect and was able to get his identification. The suspect reportedly said they knew they "messed up."

A Michigan Department of Natural Resources conservation officer and sheriff's deputies "caught the New Boston men as they were leaving the access site," Micah Walker writes. New Boston is part of Huron Township in Wayne County.

The DNR will submit a report to the Manistee County Prosecutor’s Office to determine whether charges will be authorized.

A first-time offender can face a fine of up to $5,000 or one year in jail for shooting a bald eagle.

The severely injured bird was euthanized at Wings of Wonder, a rescue and rehabilitation facility in Empire. X-rays showed several fractures and one shattered bone in the left wing, along with five pellets, the center's executive director tells MLive. There was one broken bone and one pellet in the right wing.