LeDuff: Who killed the house? After nearly two weeks, we're still not sure

The Detroit murder mystery that's captivated the country has been solved. Sorta.

And in true Detroit fashion, the story of who killed the house is...well...

The headline from The Washington Post says it all: Police: Lawmaker failed to disclose bids to demolish house 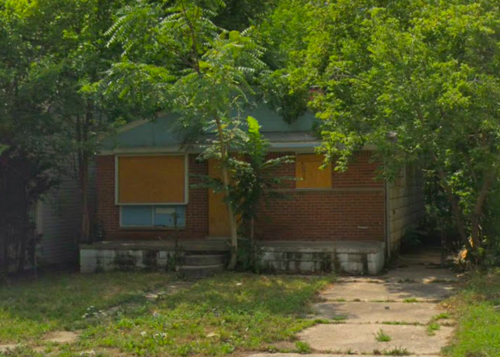 All that's left is a hole -- and a lot of confusion

Police Chief James Craig announced at a Wednesday press conference that after 11 arduous days of sleuthing, the man responsible for the mysterious razing of a house owned by a nonprofit group run by Democratic state Rep. Sherry Gay-Dagnogo had been identified.

Sherman Gipson, of Gipson Brothers Trucking, has given a full confession. He faces felony charges of malicious destruction of property over $20,000.

The chief stressed at the midday media confab – broadcast live on Facebook – that there was no evidence the representative was responsible for the demolition of her own property or that she gave the order for the demolition.

But the chief said this only after obliquely implying that Gay-Dagnogno had somehow obstructed justice.

“Unfortunately, as we continued this time-consuming investigation, we determined days later that state Rep. Gay-Dagnogo solicited bids for demolition of this property, and this was withheld from our investigators during several meetings held early on,” the chief said. “Now, had we gotten that information that bids were solicited, we could have identified the subject within 24 to 48 hours. But again, that didn't happen.”

So now, the politician looks like a crook. The chief's poster board prop of the players in this whodunit didn't help the madame representative's reputation. It looked little better than the Gambino crime family tree. One Detroit detective even went so far as to describe Gay-Dagnogo as “the top of the chain.”

The chief characterized all this as “a very complex investigation.”

The truth is less subtle. As it happens, Gay-Dagnogo did, in fact, tell the police she had solicited bids when they first interviewed her on Sept. 28. She did not, however, tell them she received an estimate Sept. 23. Still, the estimate was not from Gipson. And she didn't give permission to raze the house.

Authorities verified that Gay-Dagnogo did provide the phone number of the representative helping her to compile those bids. She also gave detectives the number of a contractor who happened to have a picture of a man and a machine tearing down the house.

Moreover, the police found receipts with Gipson's company's name on them at the landfill where he dumped the bones of the house.

Now get this: The police even found an empty prescription bottle with Gipson's name on it at the site where the house stood.

But even I knew Gipson was the main suspect. I called him a week ago. He stammered and mumbled before hanging  up the phone.

Still, it took the police another week to bring him to justice.

It should also be pointed out that Gay-Dagnogo informed the City Council almost two weeks ago, in writing, that she had solicited bids for demolition. She also wrote as much to the attorney general.

“I'm just blown away,” Gay-Dagnogo said by phone. “To imply I somehow was covering something up is outrageous. I did receive notification that a company had bid on the job, but I didn't think about it, since I gave the police the phone number of the person handling all that for me.”

I am not defending Gay-Dagnogo. She is guilty of not making the point clear to the media that she had in fact solicited bids to knock down the fire-damaged house.

Mislead the media and you're dead.

It should be noted that Gay-Dagnogo has been a vocal critic of Mayor Mike Duggan and his handling of the Detroit demolition program; a program awash in incompetence and the subject of a long-running federal corruption probe. Was the press conference, and its innuendo of coverup, intended to be political payback? The representative may think so, but who knows?

The question that is still unanswered: Who instructed Gipson to tear down the house?