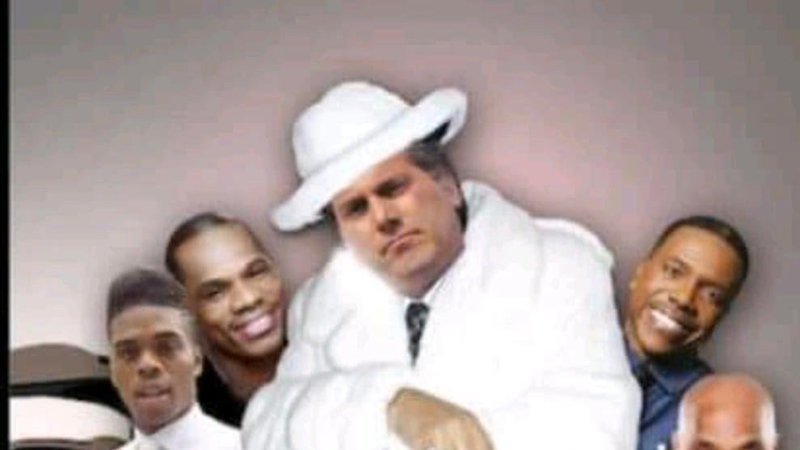 The meme posted at Moveon.org.

Here's the latest: He admitted Sunday that he sent a racially charged meme to Bishop George Bloomer, a North Carolina pastor who recently parted ways with his religious TV network over the direction of his show, Oralandar Brand-Williams of The Detroit News reports. Adell owns WADL-TV, 910-AM Superstation and The Word Network.

Adell claims he sent the meme to make the bishop aware of it. Bloomer is one of the pastors depicted in the meme, which shows Adell draped in a white fur coat and fur hat, an image reminiscent of 1970s pimp caricatures, with four black pastors from The Word Network and a Lamborghini behind him.

Adell tells the paper he's offended by the meme.

Last week, a group called Concerned African-American Clergy & Allies, launched an online boycott of The Word Network. By early Sunday afternoon, more than 3,700 people had signed the petition on change.org.

Change.org posted a photo of the meme along with this:

The Word Network is one of the largest Christian television networks targeting the Black community, but sadly in September 2019 incidents of racism have occurred at the network. The Word Network is not Black owned but is owned by Kevin Adell who is White. Recently, his actions have shown that even though he has profited off of the Black community, Mr. Adell does not have regard for Black humanity. Bishop George Bloomer, a pioneer in the Christian faith, has contributed a great deal to the success of the Word network. Recently, Bishop Bloomer has testified to issues of flagrant racism committed by Word Network owner, Kevin Adell. These incidents include:

Texting a photo that was created, depicting Adell who is White, dressed as a pimp and various well-known Black clergy surrounding him as his “hoes”. Although Adell did not create this image, he wasn’t offended by it and even texted it to various staff (many of whom are African-American) including Bishop Bloomer. This created a hostile work environment for Bishop Bloomer and others.

When Bishop Bloomer stated: “This is not funny. This is not good. That pimp talk and hoe talk has racist connotations for Black people.” Adell texted Bishop Bloomer a second time and said that “it’s funny and he should get over it.”