William Millken, a former 14-year Michigan governor who died Friday at 97 in his Traverse City home, carved an imprint on the state that's deep and rich -- as effusive bipartisan tributes confirm.

“Gov. Milliken was a true statesman who led our state with integrity and honor," Gov. Gretchen Whitmer, a Democrat, says of the Republican who was Michigan’s longest-serving chief executive (1969-83). "He had a unique ability to bring people from both sides of the aisle together for the betterment of Michigan." (Full statement is below.) 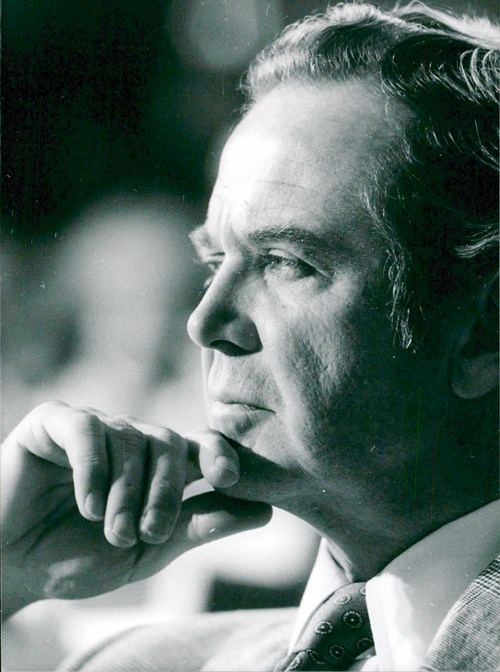 The former governor’s moderate politics didn’t jibe with an increasingly hard-right Republican Party in recent decades. . . . Milliken is bitterly remembered by Republicans for his Democratic endorsements, like Hillary Clinton over Donald Trump in 2016. His Grand Traverse Republican Party even condemned him that year for his blessing of Clinton.

Gov. Milliken was a friend, always. He encouraged me on many fronts and led a life with no regrets. His infectious smile charmed and disarmed all who knew him, and his bipartisan style served as a role model of days gone by and certainly needed today! https://t.co/PwzPDloOhc

At the Detroit Free Press, Lansing bureau chief Paul Egan notes that "after leaving office, he rejected the rightward turn of the GOP and expressed regret at the bitterness and divisiveness of public life.

He was known as a champion of Detroit and the state's environment, working closely with the late former Detroit Mayor Coleman Young, and pushing for Michigan's bottle deposit law, among other initiatives.

He made Michigan the first state to ban PCBs (polychlorinated biphenyls), which were widely used in electrical transformers and linked to cancer, and DDT, a pesticide harmful to wildlife and humans.

► James Blanchard, former Democratic governor (1983-91): "Gov. Bill Milliken was a role model for decency and civility in politics. Indeed he was the gold standard. He also governed effectively in a  bipartisan fashion, something unheard of today.”

So very sad — Bill Milliken was the personification of decency. RIP to a fervent conservationist, a statesman, an honest and true gentleman. If only we had more like him in this moment of division and acrimony ...
I know his beloved wife Helen is happy to welcome him home. https://t.co/WnVTw0oG3U

We all will miss Bill Milliken’s devotion to Michigan and his calling to serve our state and our country. His leadership on environmental stewardship of our Great Lakes is a lasting legacy. He was a strong Governor.

Governor Bill Milliken was one of the most amazing public servants I’ve ever worked with. He set the bar for integrity, dedication, and kindness. His passion for MI and our Great Lakes was unsurpassed. I was honored to call him my friend. https://t.co/0ucpkDGVc1

1/2 "Gov. Milliken had an innate ability to bring people together. He was a man who understood diplomacy and the importance of bipartisanship. Michigan is a stronger state because of his leadership and ability to reach across the aisle to make the lives of our residents better. 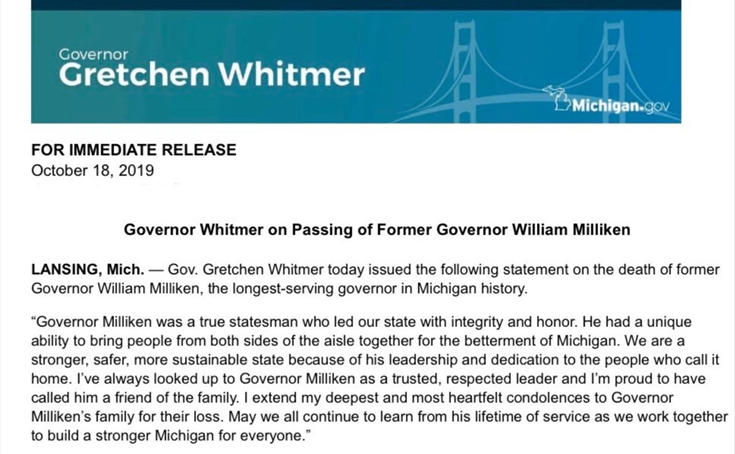