The dusty, Carolina-style pork back ribs . . . are something special.

The restaurant was launched in spring 2010 by Tasso and Michael Teftsis, Greek-American brothers who saw barbecue as a way to differ from their Monroe Street neighbors' lamb, moussaka, spanikopita, dolmathes and saganaki. It's now run by second-generation owner George Teftsis, who took over this year from his dad, Tasso. 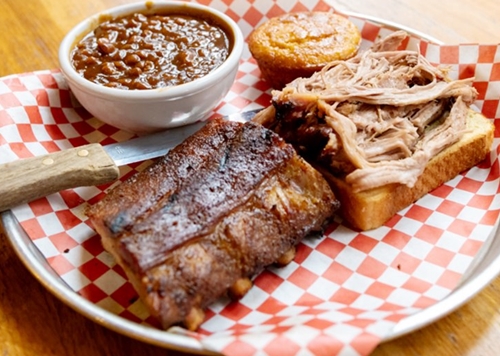 Baetens slathers praise on more than the ribs, which also include St. Louis-style spare ribs as a half- or full slab.

Both [styles] are smoked over hickory wood and chargrilled. The Carolina slabs come dry with a seasoned, smoky crust that holds in enough moisture that makes the meat a pleasure to eat off the bone. The St. Louis ribs, which are a bit more popular, are shorter and contain more fat. . . .

Teftsis is mighty proud of his brisket, too, which is tender after being slow-smoked for 14 hours, and is a little fatty with a nice bark that has a bit of garlic, onion and other flavors. . . .

No one, however, should leave Red Smoke without ordering the jalapeno cheddar corn muffins. . . . [They are] far and away the best I've had recently, and possibly ever.

The tennis ball-sized muffins are a little sticky, sweet, moist and perfectly golden. The flavors of cornmeal, fresh jalapeno and cheddar all come through. These are included with the combos, but in any other instance you have to order them separately for $1.99. Get two. 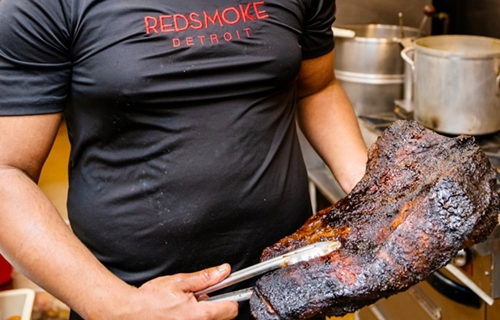