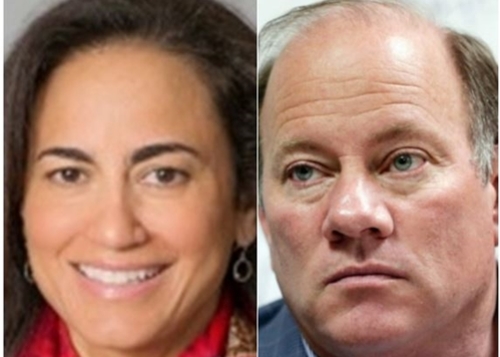 In a report the Free Press describes as "explosive," Detroit's inspector general on Monday says Mayor Mike Duggan gave preferential treatment to a prenatal health program run by a woman with whom he reportedly was romantically involved.

Joe Guillen and Kat Stafford of the Freep write:

Alexis Wiley, one of Detroit's highest-ranking officials, abused her authority by twice ordering city staff to delete their emails related to the program, known as Make Your Date, as the mayor’s ties came under scrutiny by the Free Press and others. The revelation that Wiley was behind more than 200 pages of mysteriously deleted emails was one of several instances of misconduct cited in the report surrounding the city’s relationship with Make Your Date.

Inspector General Ellen Ha concluded that Make Your Date received preferential treatment from Duggan because it was picked to be the city’s program to fight infant mortality outside of the competitive selection process outlined in the city’s procurement policies.

The investigation was launched in April following a Freep report that found Duggan handpicked Dr. Sonia Hassan to lead city efforts to reduce preterm births and ordered city staff to raise money for Make Your Date. The city also directed more than $358,000 in federal grants to the program.

The OIG report concludes the program "received an inordinate amount of city time and resources, considering the fundraising goals and scope of work when compared against other projects of similar size and scope." The program was also unique in that it "was created at the direction of Mayor Duggan whereas most, if not all, of the city’s other partners were already established with a proven track record.”

Detroit Health Department staff reported to feeling pressured by the mayor's office when working on the program.

If there was ever a problem with the health department, Make Your Date “would go directly to the mayor’s office and the mayor would call the DHD Director who would, in turn, scold the DHD staff regardless of fault,” one health department worker told the inspector general.

A lengthy rebuttal filed on behalf of Duggan, Wiley, and two officials who relayed Wiley's directive disputes the report's findings. Lawyer Eli Savit argued the OIG should reverse its determinations because they are "not supported by facts or applicable legal standards." He focused on a number of technicalities including the inspector general's definition of "preferential treatment" and "abuse of authority."

Use of an "undefined standard," Savit wrote, "threatens to chill governmental operations."

"If city employees fear that they might be publicly censured for failure to abide by some indeterminate standard, they may be hamstrung in performing their duties."

More "egregious" than the preferential treatment, Ha wrote, is that Wiley ordered emails deleted. The directive was issued to junior staffers through Office of Development and Grants department heads Ryan Friedrichs and Sirene Abou-Chakra.

"The very fact that they were ordered to be deleted alone casts a shadow over transparency," the report says.

Wiley ordered the emails deleted in December of 2018, around the time businessman Bob Carmack broadcast footage of Duggan and Hassan outside city hall. While Savit claims Wiley was acting to protect junior staffers in the Office of Development and Grants from Carmack — the order came weeks after the Free Press says it filed its first public records request on the program.

Savit conceded Wiley's actions represented an “error in judgement.” The messages were eventually made publicly available by the city.

Wiley told the inspector general she didn't recall issuing the directive, contrary to the accounts of multiple colleagues. She also contradicted herself when explaining how she reacted to news the emails were gone, the report said.

Wiley also misled the public in initially claiming that development and grants staff did not help fundraise for Make Your Date, the report concluded.

She strongly contested the report in a statement issued to media Monday:

"I have spent my life building a career based on integrity. In my 10 years as a reporter and 6 years in government, my integrity has never once been questioned. I would never knowingly do anything that would jeopardize or undermine that. When interviewed by the Office of the Inspector General, I was truthful and I stand by my statements.  Needless to say, I strongly disagree with the OIG findings."

Recommendations include discipline for Wiley, Friedrichs and Abou-Chakra, as well as training on record retention policies.

The report also says the city should "establish policies and procedures for the selection of organizations, agencies, and nonprofits that will partner with the City of Detroit and receive any type of City resource" to "ensure fairness, openness, and transparency in the selection process."

The IG's report does not make any legal determinations. A separate investigation by the Michigan Attorney General's Office is expected to look at whether those involved broke any laws.

"Due to our pending investigation we're unable to comment at this point," Attorney General spokesman Dan Olsen told Deadline Detroit.

In a statement issued Monday afternoon, the Duggan administration says the mayor will consult with human resources to determine whether the three employees should be disciplined.

“We agree with the OIG’s assessment that the emails’ deletion was not in the best interest of transparent government,” said Detroit CFO Dave Massaron, who the city says led the effort to retrieve the emails.