Something Is Odd About 37 New 'Local News' Sites Across Michigan

The truism that things aren't necessarily what they appear to be fits the three websites above and nearly identical ones that popped up statewide this fall.

They look like professional media, though with unfamiliar names and no local journalists. Actually, they're from a distant company and "have stories with a conservative political bent," Lansing State Journal sleuthing shows.

The nearly 40 new sites present a challenge for readers navigating a digital media environment that has unlimited space for publishing stories that are hard to distinguish as journalism, advocacy or political messaging.

These are among current posts:

► Election hacking try: "An ongoing investigation into an attempted 2018 midterm elections hack could lead the FBI to the University of Michigan. . . . The unsuccessful attempted hack may be a part of a University of Michigan election security course. The investigation has brought into question the methods used in research." A Republican state senator talks about proceeding cautiously before "expanding the ease of voting. . . . We must be careful with progress when it comes to protecting the future of our elections.”

► Voter fraud: "Fifteen people have been found guilty of election or voter fraud in Michigan since the year 2000, according to a Heritage Foundation database." The Washington foundation is a conservative policy center. Examples of what it calls fraud include ineligible voters and ballot petition violations.

The Detroit-area sites and ones stretching from Monroe to the U.P. are published by Metric Media LLC, which says it aims to fill the "growing void in local and community news after years of steady disinvestment in local reporting by legacy media."

We were founded by a group of people deeply committed to addressing the growing news desert at the local level. This site is one of hundreds and eventually thousands that we are launching nationwide to fill that void in local and community news. 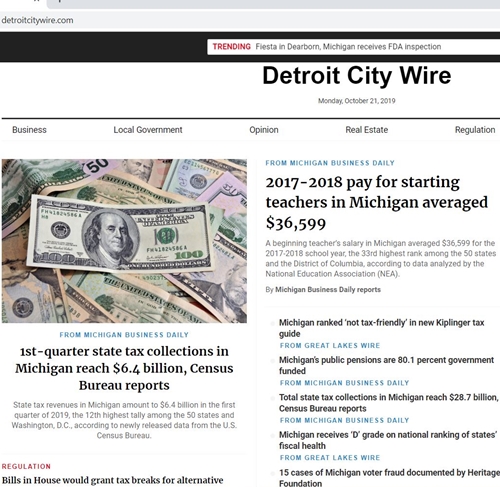 Company chief executive Bradley Cameron, based in Washington, D.C., describes himself as "a strategy expert with . . . experience in strategic planning, crisis and brand management, and organizational design." He was "senior advisor to the Republican strategy leader in the U.S. House of Representatives," his bio adds.

Political information outlets aren't new, he said, but presenting them as non-biased local news sources is.

"The big issue is this extent to which they have gone to try to confuse about this being the site of a local newspaper," he said.

"Any kind of politically slanted information which people think could be from a reputable news source really compromises the quality of discourse we have in this country," Davis said. "It's not fake news, but it’s not exactly what we want people to be consuming either."