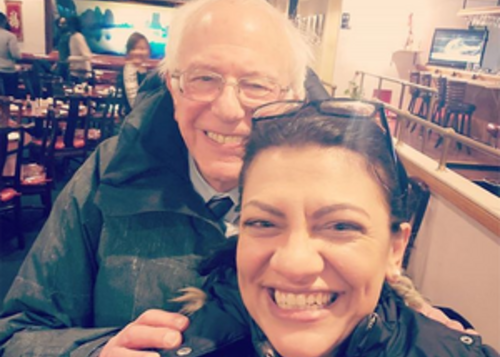 High-profile progressive Democratic Rep. Rashida Tlaib did not join Reps. Alexandria Ocasio-Cortez and Ilhan Omar — two of her counterparts in "The Squad" — in endorsing Bernie Sanders for president last week. But she's expected to do so at just-announced Detroit rally with the Vermont Senator this Sunday.

The Sanders campaign said the two lawmakers will be joined Sunday “by local leaders and activists fighting for economic, environmental and racial justice, and against the corporate assault on working families across America.”

The appearance with Tlaib shortly after last weekend’s New York City rally with Ocasio-Cortez could help give Sanders a shot in the arm as sliding poll numbers and a heart attack spark questions about his campaign’s viability. [Massachusetts Sen. Elizabeth] Warren has also worked to take a bite out of Sanders's progressive support in recent months, surging in the polls while rolling out similar proposals with in-depth explanations.

Tlaib has long aligned herself with Sanders, but recently released a video with Warren spotlighting pollution in Detroit.

I had dinner with Amo (Uncle) Bernie tonight! We talked about my passion for economic justice and fighting for corporations to pay their fair share. This man gets me. #rootedincommunity