Selweski: Are Warren voters about to re-elect a ‘psychopath’ as mayor?

Imagine a major city where the elderly mayor seeking re-election has fantasized in detail about killing political enemies and spouted crude discriminatory comments about blacks, gays, handicapped children and senior citizens. And it’s all been caught on tape.

Yet, local political observers predict that Fouts will win re-election to a fourth term in a little more than a week, on Nov. 5. In fact, most speculation calls for a wide margin of victory over his opponent, city Councilwoman Kelly Collegio.

City voters somehow seem willing to accept this this monstrous public official as their city’s leader no matter what he does or says – in a very Trump-like fashion of voter loyalty.

In a recurring example of Warren’s outrageous politics, the 77-year-old mayor continues to claim that the voice on numerous, secretly recorded tapes that have emerged over the past three years is either: 1) not his, or 2) a doctored version of his conversations in City Hall and on the phone.

But the person speaking on each of the recordings sounds exactly like Fouts, who has a very distinctive voice. A voice recognition expert confirmed long ago that the voice belongs to Fouts. And in a recent tape, Fouts refers to himself as “the mayor.”

The newest tape, revealed anonymously on Monday, appears to lay bare Fouts’ hatred for his former chief of staff, Henry Krzystowczyk, a Fouts loyalist who quit after just six months on the job. Here’s the tantrum:

In other profanity laced recordings that have become public the mayor has: used the N-word and referred to blacks as chimpanzees; said that handicapped children – “retards” — should be locked in cages or euthanized; said he would enjoy having sex with the women in a local shelter for battered females; called older women “dried-up c-nts;” complained that the treatment he received from the press was like being raped; suggested that a U.S. senator with a developmentally disabled daughter should have had the “mongoloid” child aborted; marveled at how easy it is to secure a 16-year-old prostitute in the Netherlands; and labeled homosexuals as “fags.”

What’s particularly disturbing is that Fouts’ anger aimed at Krzystowcyzk is remarkably similar to a 2013 tape that emerged after a lawsuit filed against the city by a whistleblower who was demoted.

On the tapes, the mayor envisions different kinds of bodily harm he would like to inflict on Munem and Schroder, who had both turned political foes.

As for Schroder, Fouts said he would simply “rip his f—— a– out.”

“No private individual should be investigated by a political machine,” Krzystowczyk, then 82, said at the time.

“Fouts is very paranoid. He doesn't want any stone unturned. If there's something in his way, he wants to know about it,” Krzystowczyk added.

Krzystowcyzk died in May at age 88 and, according to his daughter, he mended fences with the mayor while anticipating death during a long hospital stay.

Meanwhile, Fouts has increasingly gained national attention as a politician so unhinged or wrapped up in narcissism that he assumes he is a key figure in presidential politics. 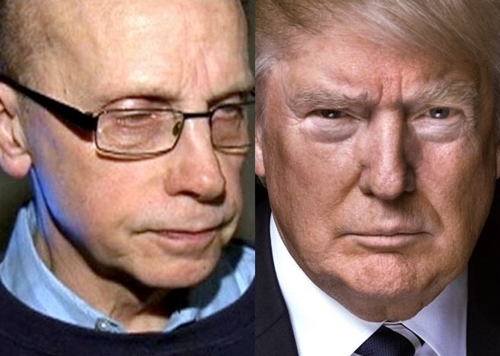 In recent days, the mayor became the focal point of an article at the national news site Vice. The headline: “This Mayor Allegedly Said Vile, Racist Things on Tape. Voters Still Stand by Him.”

The latest Fouts invectives about murdering Krzystowcyzk surface on a 90-second video with audio recordings posted online by someone using the pseudonym “Joe Warren.” The video implies Trump is a “psychopath” and provides a standard definition: A person suffering from chronic mental disorder with abnormal or violent social behavior.

The numerous tapes aimed at the mayor remain anonymous – and politically deadly, under normal circumstances.

If only the majority of Warren voters were familiar with the totality of Fouts’ shameless behavior.

Except, this is Warren, where four decades of warfare-style campaigning has become so ruthless and juvenile that city voters have dealt with Trump-style politics long before other Americans.

They cannot distinguish between truth and lies.