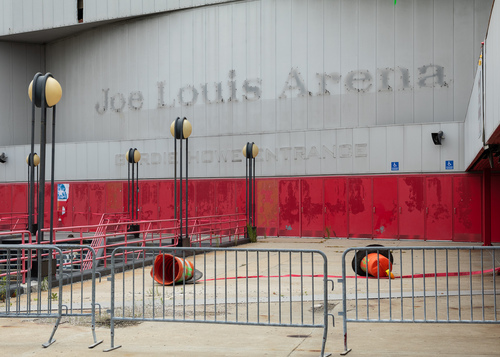 Is the Detroit Riverfront for everyone? That claim was central to Detroit Mayor Mike Duggan's re-election platform in 2017.

In 2019 — sure, you can walk the riverfront. But you don't get to know about all the development plans along it, which means you don't get any say. At least, not immediately.

Let's first start with what we do know. According to the Freep, a tentative deal has been struck to give the Joe Louis Arena site to local developer Sterling Group in a $14 million sale that would help pay off one of the city's bankruptcy creditors. The Joe is scheduled for demolition in the new year.

The mystery is what Sterling plans to do with the site. The company — run by the adult children of the executive chairman of TCF Financial Corp — is developing TCF's coming downtown Detroit headquarters.

But Sterling won't say what its riverfront plans are, and neither will the city. The city won't even say if it knows what Sterling's plans are.

So we're left to speculate.

Will there be a strip club along the Detroit River? A needle exchange? Or the more plausible condo-restaurant concept?

One councilmember, however, doesn't seem to mind the mystery. For Gabe Leland, any private development appears to be good development.

"I'm willing to let this process move forward so we can get something going in terms of the real estate on our riverfront," [he] said.