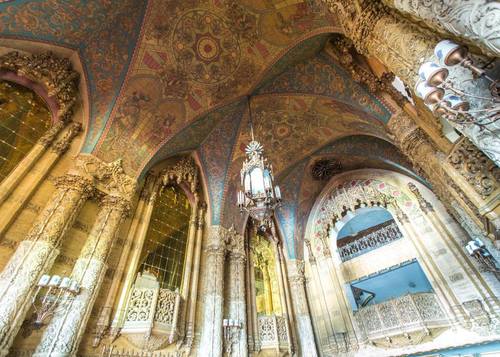 The rotunda lobby at the United Artists Theatre during a brighter period. (Photo: Facebook)

There's good news and double dose of bad news from the District Detroit.

First, the good: An Ilitch-linked developer is hoping to move forward on a planned residential project (!) at the United Artists Building at 150 Bagley, near the organization's development dead zone around Little Caesars Arena.

Now, the bad — assuming, of course, that you're among the many people who like cool architecture and/or history, and think the Ilitches and their affiliates don't deserve any more public money:

The $56-million project would convert the United Artists Building into a mixed-use development with 148 apartments, Crain's reports. On Thursday, a city council committee gave tentative approval to Moten's request for about $2.4 million in tax abatements.

But Moten is also relying on a Housing and Urban Development-backed loan, and that's where the demo request comes in. HUD, he says, will only help finance the project if the theatre, which is connected to the building, is razed, as a structural evaluation of the building recommends.

Urbanist and chair of the District Detroit neighborhood advisory committee Francis Grunow was at the council meeting and provided this dispatch:

The theater building and original office tower (which is where the residential units are proposed) have an integrated design. Therefore, without a plan to save the theater, the residential project would be negatively impacted by the vacant theater space, and securing the HUD loan would be jeopardized. Councilmember Tate asked why this documentation wasn't part of the presentation. There didn't seem to be a good answer, but Moten said he would get it to council.

[Councilmember] Benson asked if there were other financing options explored. Moten said they had approached "other banks" without naming them, and said their response was similar. Moten said the rest of the building would be redeveloped per Secretary of Interior standards, and that they would restore the theater's lobby.

While the United Artists is listed on the National Register of Historic Places, it is not locally designated, meaning that Detroit's Historic District Commission is not in a position to accept or reject the project; it can only offer an advisory position to the mayor and council, as the building is adjacent to the Grand Circus Park Historic District.

You may recognize Moten Jr.'s name from a recent news item from Demo City, USA. Earlier this month, he was given the green light from council to demolish another historic downtown building.

The Saturday Night Building, on Fort Street, will be razed within a month to make way for condominium parking. The argument from Moten Jr. and the Duggan administration — which supported the plan — was that units couldn't sell without guaranteed parking, leaving Moten unable to pay off loans issued by the city and one of its pension funds.