Conyers, who made Richard Nixon's enemies list, was the longest-serving black Congress member.

The Democrat was in the U.S. House from 1965 until his resignation, and was a force on the Judiciary Committee, which he chaired from 2007-11. He died in his sleep at his Detroit home, his son tells PBS News Hour and others.

Conyers died 10 days after another infuential black Democrat -- Rep. Elijah Cummings of Maryland, who served 23 years in the House and was Oversight Committee chair when he died Oct. 17 at 68. (Conyers chaired that committee from 1989-95.) 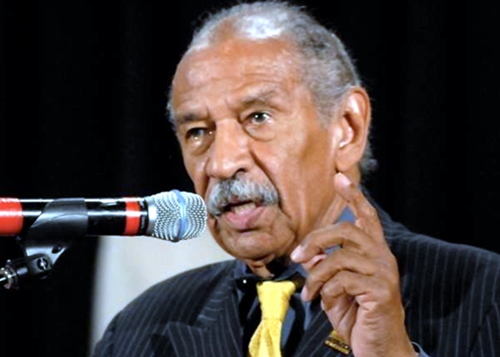 The Detroiter was a founder of the Congressional Black Caucus in 1971 and was renowned for supporting voter registration drives and providing legal representation for black voting rights activists during the civil rights movement. Later he sponsored a bill to create a national holiday honoring Martin Luther King Jr. each January.

From 1989 until he left office, Conyers introduced a bill each congressional term to create a commission that would study the impact of slavery and recommend ways to remedy its lasting effects on African Americans.

► Tributes: A 'Pioneer' Who 'Never Once Wavered In Fighting for Jobs, Justice and Peace'

Conyers was born in Highland Park, grew up in Detroit and graduated from Northwestern High School.

He graduated from Wayne State University, added a law degree from there in 1958 and subsequently worked for Congressman John Dingell.

In the early 1960s he became a leader in the civil rights movement. 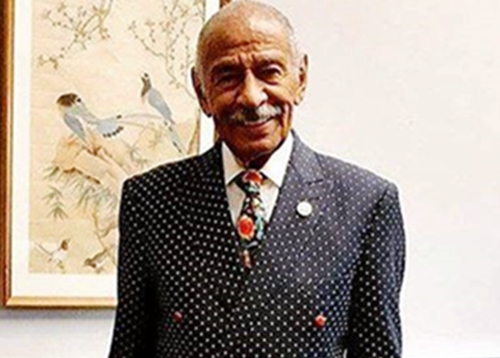 Conyers was a big supporter in the mid-1990s of strikers at the Detroit Free Press and News.

In 1990, at age 61, he married Monica Esters, a 25-year-old Detroit school teacher. They had two sons, John James III and Carl Edward Conyers. In 2010, Monica Conyers, who was elected to the city council, was sentenced to 37 months in prison for bribery.

In September 2015, she filed for divorce. A year later, the two reconciled and renewed their vows.

In December 2017, he quit while facing sexually harassment allegations from former staffers.

“From being in Selma, Alabama, on Freedom Day during the Civil Rights Movement — to co-founding the Congressional Black Caucus, chairing the House Judiciary Committee and becoming Dean of the House of Representatives — Congressman Conyers dedicated his life to fighting for civil rights. While serving in Congress with him, I saw firsthand his dedication and passion for his beloved City of Detroit and the Congressional district he represented. Colleen and I send our sympathies to the Conyers family during this time.”

“John Conyers was a civil rights champion who served Michigan and the people of Detroit for decades. He began his career working for John Dingell, before running for Congress himself and they both believed in justice and equality for all. John Conyers spent his life championing those causes. The fights John Conyers fought will be remembered for generations. I am deeply saddened by his passing. May God bring his family comfort during this difficult time."

I was deeply saddened by the passing of Congressman John Conyers today. One of my most special memories was spending time with him at Gordon Park on 12th Street and Clairmount on the 50th anniversary of the violence of 1967 as he recounted the story of his courageous efforts to calm the angry crowds.  He has fought for a better Detroit for more than half a century.

From co-founding the Congressional Black Caucus to leading the fight in Congress to enshrine Martin Luther King’s birthday as a national holiday, John Conyers’ impact on our city and nation will never be forgotten. My sympathies go out to the entire Conyers family.

“Congressman John Conyers was a lifelong Detroiter who was deeply committed to the city and to those he represented. His impact on our state, whether by spearheading reforms in criminal justice and voting rights in Congress or through his lifetime of civil rights activism, will not be forgotten. I extend my deepest condolences to Congressman Conyers’ family for their loss.”