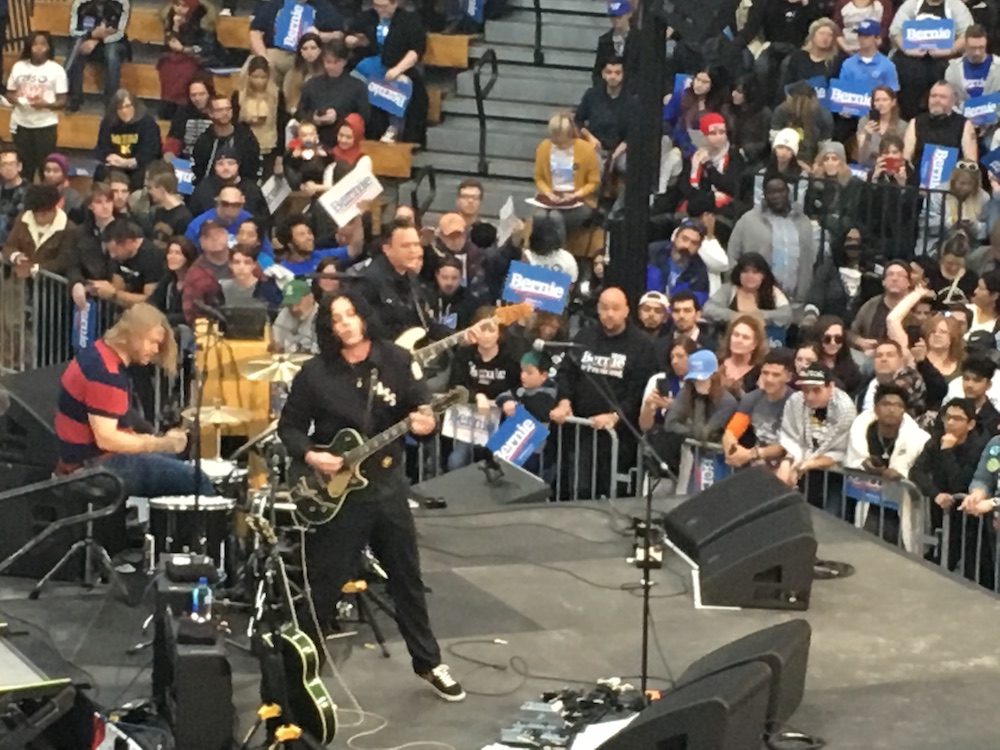 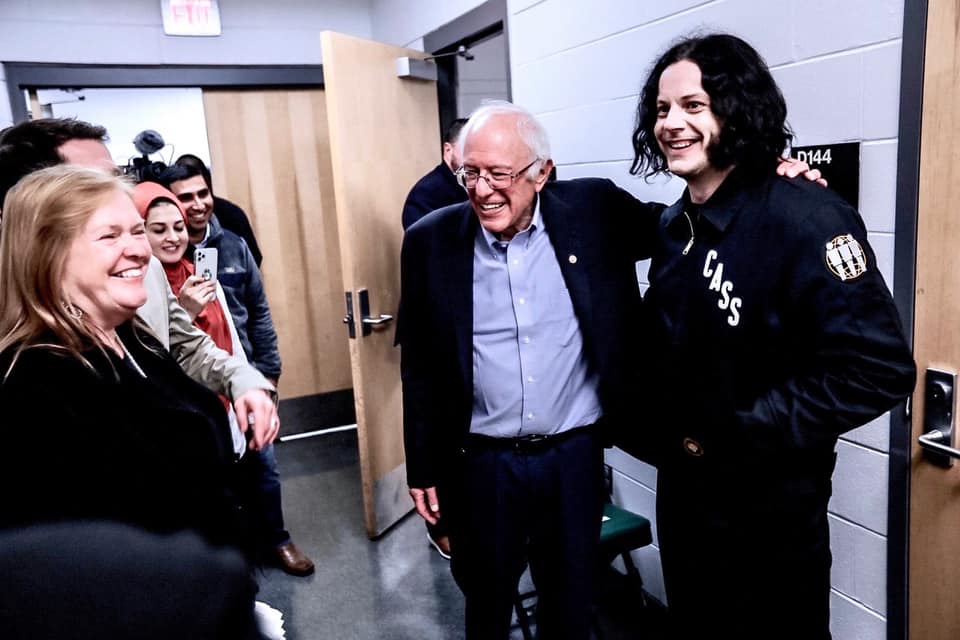 Jack White warmed up the crowd with his music and Rashida Tlaib did, too, with her words.

But fans packing the gym Sunday evening at Cass Tech High School in Detroit came for Bernie Sanders and he didn’t disappoint.

Building the tension late in his 50-minute address, the independent U.S. Senator from Vermont sarcastically referred to President Donald Trump as the self-described “stable genius” who has convinced himself that climate change is a hoax.

“If I use a profane word, I’ll get in trouble,” he added.

“All right, all right!” he finally shouted in the voice of his native Brooklyn. “He’s an idiot!”

On cue, the audience responded with a lusty roar and a waving sea of blue signs that said “Bernie, Bernie, Bernie!” 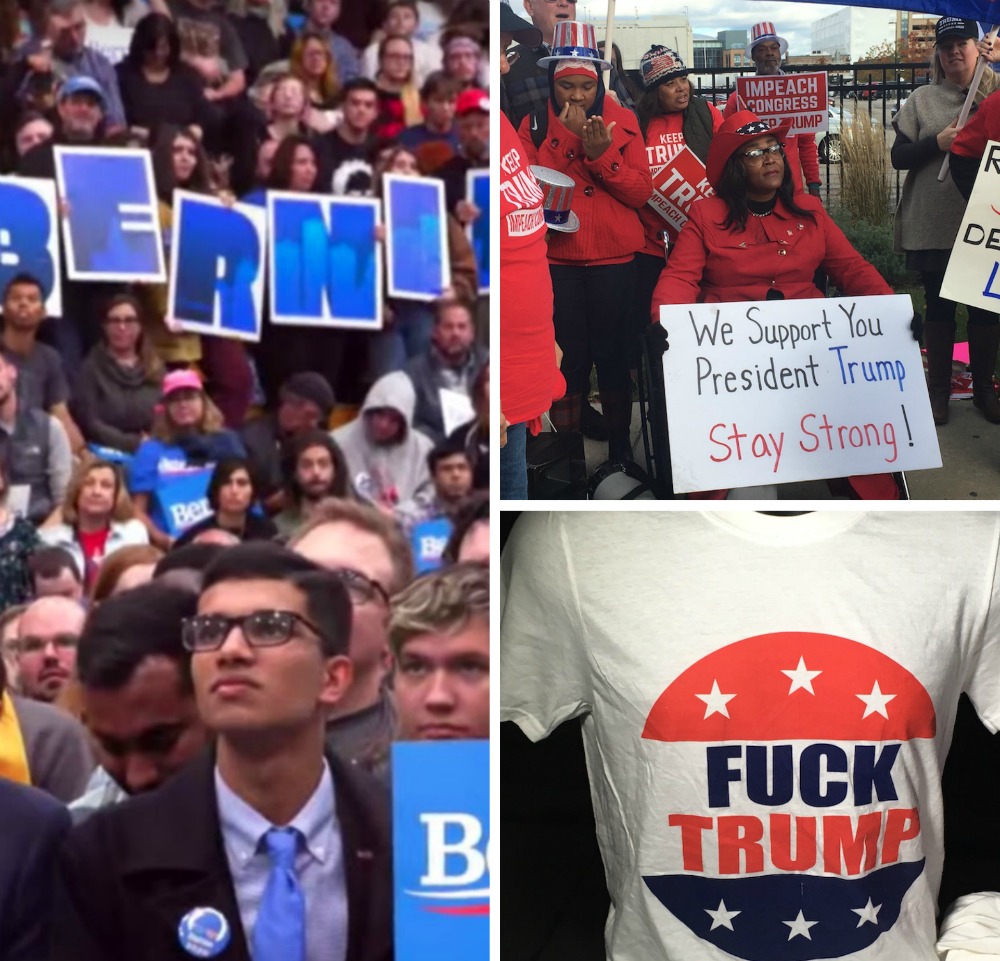 Sanders, who won the last Michigan Democratic presidential primary in 2016, is running again for the nomination to challenge Trump next November.

In a quieter moment, alluding to both his enduring support and to his heart attack last month, the 78-year-old Sanders said: “I thank you from the bottom of my heart – and, by the way, my heart is doing just fine.”

Of the day’s most somber note, both Sanders and Tlaib made reverent reference to John Conyers, the former Democratic Congressman who died Sunday at 90.

Tlaib, in 2018, won the 13th. District seat that Conyers vacated in 2017 after accusations of sexual harassment surfaced during the #MeToo movement.

Many in the audience were too young to remember much of Conyers’s 53-year career as a civil rights advocate and founding member of the Congressional Black Caucus. 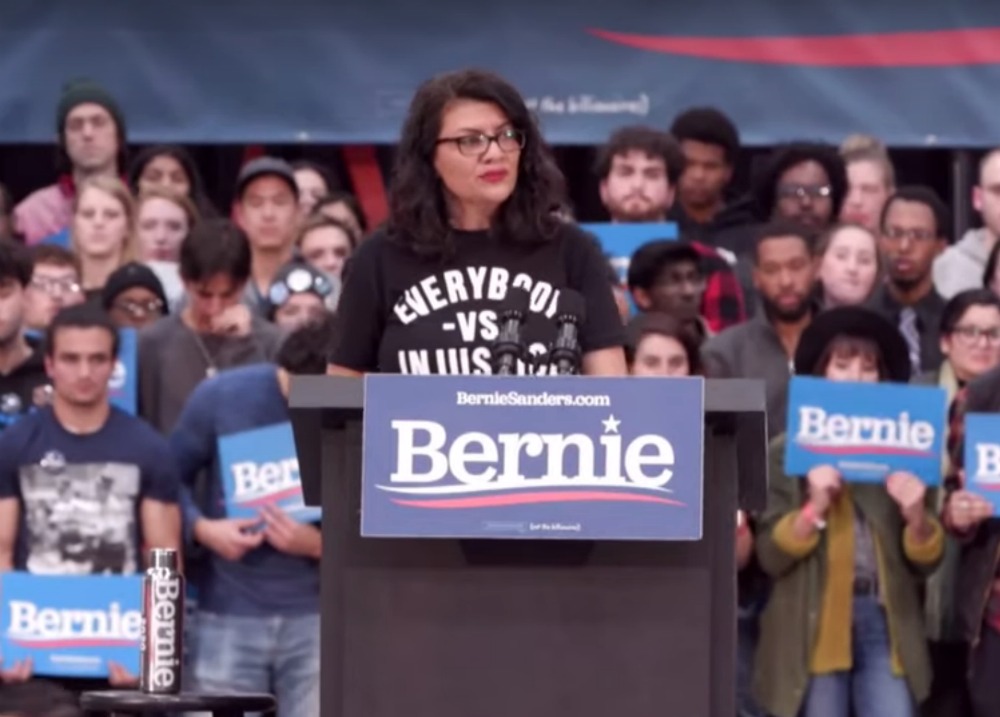 Rep. Rashida Tlaib at the rally.

The majority of Sunday’s rally attendees were white, although there were also quite a few black supporters as well as many women wearing the Muslim hajib on their heads.

Tlaib – the rookie congresswoman from Southwest Detroit – is the first Palestinian-American woman to serve in the Congress and many Muslims live in the Detroit area.

Both Tlaib and White are Detroit Public Schools graduates -- Tlaib graduated from Southwestern, White from Cass.

White wore a jacket that said Cass Corridor on the back. In the warm hall, he quickly shed it during a set of about 30 minutes, stripping down to a shirt that said Cass Tech.

Also a native of Detroit’s Southwest side, White used to play bar gigs in the old corridor and said he is new to politics.

“I’ve never done a political rally before,” White said. “But Bernie’s telling the truth and I trust him.”

Outside and across the street, at the corner of Second and Henry, a cluster of about a dozen Trump supporters carried signs and wore red hats and carried on a shouting match with one man who decided to debate all of them at the same time.

“Stop Socialism,” said one of their signs, decorated with the hammer and sickle logo of communism. “Keep Trump,” said another sign. “Impeach Congress.”

Inside the school gym, the white-haired Sanders checked all the boxes on topics favored by left-of-center progressives.

“The wealthiest people in this country have never had it so good!” he thundered.

“Eat the rich!” shouted a man in response.

Sanders said greedy people with money are like drug addicts or alcoholics who want “more, and more and more” and he asked “What does freedom mean to someone sleeping on the street tonight?”

He reminded his audience that, a few weeks ago, on a visit to Detroit, he went over to Windsor to buy Canadian insulin which sells for one-tenth the price of the same thing in the U.S.

Waving his right arm for emphasis and gesturing with his right index finger, Sanders supported the Green New Deal to combat climate change, promised a “fundamental reform of a broke and racist justice system” and vowed to “end the demonization of immigrants” and institute a “humane border policy.”

“Babies will not be snatched from the arms of their mothers,” Sanders said. “And children will not be locked up in cages.”

In other contexts, he found fault with both the National Rifle Association and the agents of the Immigration and Customs Enforcement (ICE).

Both outfits are treasured by Trump, who Sanders called “the most dangerous president in the history of this country.”

Tlaib endorsed Sanders one week after her fellow first-term Democrat, Alexandria Ocasio-Cortez, did the same at a rally in New York. Both are running for reelection next year. Tlaib wore a shirt that said “Everybody vs. Injustice.”

She chastised in particular a nearby business, Little Caesars Arena, run by the wealthy Ilitch family, whose empire also includes the Red Wings, the Tigers, a pizza chain and a casino.

To get the new arena built, Tlaib said, they took unfair advantage of the public for $324 million in tax breaks.

“In exchange for broken promise of jobs and housing,” she said, “they took millions away from our schools.”

But on the sidewalk outside this particular school, at least one person was working.

He was a T-shirt vendor and one in his collection showed a black-and-white photograph of a young Sanders being arrested by Chicago police at a demonstration in the 1960s.

The vendor said it was his best-seller. Another shirt – in red, white and blue with stars – said simply “Fuck Trump.”