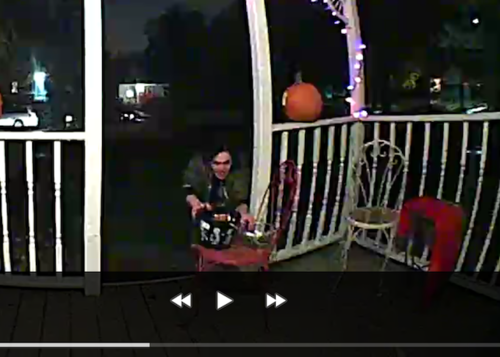 Ring cameras may be the best thing to ever happen to Halloween.

A king-sized Halloween villain struck last night in Royal Oak, nabbing a bucket of candy left out for trick-or-treaters before driving off in a getaway car.

The episode, which occurred near 12 Mile and Crooks, was caught on one family's Ring camera.

Video shows the cartoonish candy thief — who looks to be in his late teens or early 20s — taking one of two candy buckets the family left sitting out on their porch. It was the one with "all the good stuff," they tell Deadline Detroit. We're talking Kit-Kats, Reese's cups, Butterfingers, Snickers and Milky Way.

"Truthfully, it did not cross my mind that the bowl of candy would get stolen," said the mother. "I guess I would not have been surprised if a trick-or-tricker had walked up and dumped all of the candy into their bowl — but this person drove up in front of the house, sneakily crept up, took the whole bucket, ran back to the car and drove away."

The mother says the candy thief struck shortly after she and her husband went inside to put their toddler to bed around 7:20 p.m. The throngs of trick-or-treaters were thinning, but the couple wanted to make sure kids could still get candy while they were away. They also wanted to see the kids, so they turned on the camera's motion censor, which would alert them to any activity.

Then, twenty minutes later, an alert went off, revealing not a sweet child in costume, but a sneering adult in plain clothes.

At first, the mother says she was mad.

But then, she felt a bit relieved.

"[He] only took the cheap plastic Halloween bucket full of candy and not our nice, glass Tupperware bowl full of the allergy-friendly suckers."

The family has asked to remain anonymous, as they don't want to seem like the types that call the news over petty thefts captured by Ring. And for the record, they didn't call us — we called them.