Gov. Milliken, beloved by so many, shunned in death by state GOP

Deadline Detroit contributor Chad Selweski notices that "other than a few perfunctory tributes within the first 24 hours of [Gov. William] Milliken’s passing," the state Republican party structure has largely "shunned" the former Michigan chief executive, who died last month at 97. 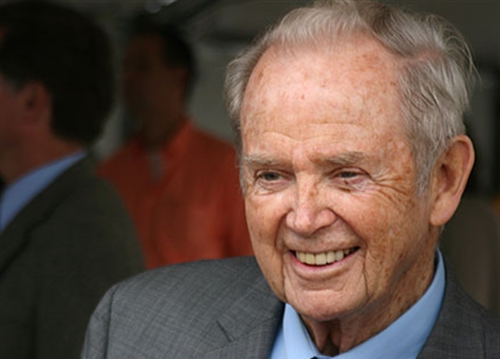 On his blog, Selweski notes what many of Milliken's obituaries played down: That as his moderation and open-to-compromise political style faded from party politics, Michigan Republicans began treating the gentlemanly Milliken as an embarrassment, or worse.

Milliken was labeled a liberal Republican, a “Rockefeller Republican” who stood in sharp contrast to the Reagan Republicans. He avoided partisan rhetoric and dogma in favor of a pragmatic approach. His top aide, Bill Rustem, recalled that Milliken served in “an age of civility when compromise was not a bad word, and when you listened instead of shouted.”

...Grand Traverse County Republicans disavowed him, passing a resolution that booted him from his hometown county part, for reasons that included his veto of an abortion bill 34 years earlier. Ultimately, he was despised because he refused to march in lockstep and broke the cardinal rule: “Republicans exist to elect Republicans.”

He later quotes party activist Dennis Lennox, who wrote in a Washington Times op-ed that Milliken "never evolved" as the party moved sharply to the right in the last 30 years. But Selweski points out:

Yet, his stands on environmental protection, civil rights, women’s rights and same-sex marriage now serve as standard fare among the majority of Americans.

The same phenomenon can be seen in the Democratic party as well, Selweski said, as younger, more left-leaning activists disparage the moderation of the generation that came before.