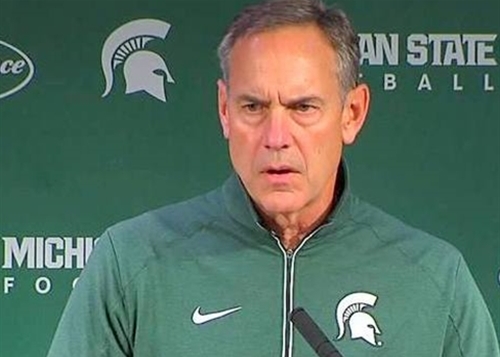 Mark Dantonio, coaching a football team that seems to be governed by some sort of curse, was (needless to say) displeased by Saturday's upset loss to Illinois in East Lansing. Then he got testy, the Freep reports:

“Mark, what would tell the students, the alums — some of them are unhappy about the way things are going — what the future would be like?” the reporter asked. “What would turn it around, that maybe this is an aberration and not a trend?”

Dantonio replied with those two words.

Whoa, sick burn, coach. Nevertheless, the 37-34 loss, in a collapse no less, will remain on the books:

The Illini scored four fourth-quarter touchdowns to rally from a 21-point deficit, gaining 210 of their 405 yards in the final period. Michigan transfer QB Brandon Peters passed for 215 yards of his 369 yards and two of his three TDs in the quarter, including the 5-yard game-winner to Daniel Barker with 5 seconds to play.

With other problems plaguing Michigan's land-grant university -- a stubborn resistance to reform following the Larry Nassar scandal and related ongoing board troubles -- it's almost as though problems with the football program are sort of a punishment from on high.

Beats us. Maybe the coach would like to consult an exorcist.