Mike Shirkey, majority leader of the Michigan Senate, knew he was stepping onto slippery ground in a college radio interview. "People are going to be very upset when I say this," the Republican from Jackson County began.

Still, he marched ahead and said legal abortions are "comparable to the scourge that we endured when we still had slavery in this country." 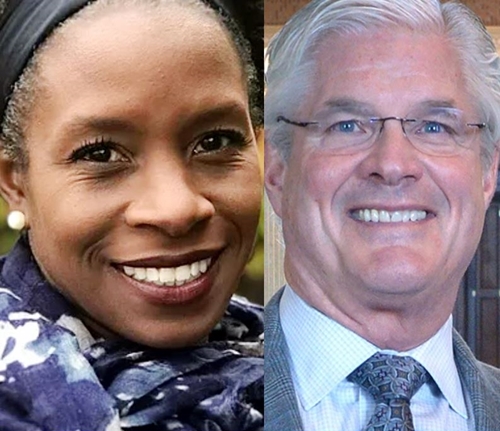 Erika Gross of Taylor says Mike Shirkey of Jackson County is "incredibly out of touch."

State Sen. Erika Geiss of Taylor is among those blowing an out-of-bounds whistle, the Associated Press reports:

"It is incredibly out of touch for him to have made such incredibly insensitive remarks," said Geiss, who is black. "I don't think comparing something that is a reproductive health care choice for one in four women — that is really no one's business except between her and her physician — has any place in a conversation about slavery."

Shirkey should apologize, the suburban Democrat said Tuesday. He sees no need for that, an aide tells the wire service:

"The majority leader would never want to offend anybody with his words, but he believes that the divisive nature of [abortion] is analogous to the comparison that he made," said Amber McCann.

The Republican, who lives in Clark Lake, also is criticized by Planned Parenthood Advocates of Michigan, whose spokeswoman says:

"No matter how any of us feels about abortion, I think we can all agree that equating a safe, legal medical procedure with slavery is as ludicrous as it is disgusting."

Shirkey, a 64-year-old engineering firm owner, has been in the legislature since 2011. His district covers all of Branch, Hillsdale, and Jackson Counties.

Geiss, a 49-year-old small business owner, came to the legislature in 2015. Her district comprises Romulus, Taylor and part of Van Buren Township.