An honor roll student at Henry Ford College accuses an instructor of aiming an "Islamophobic rant" at him.

Ali Jaber of Dearborn, who reported the alleged Oct. 31 incident to administrators, spoke about it Tuesday alongside an advocacy group attorney who filed a harassment and racial discrimination complaint with the Michigan Department of Civil Rights. 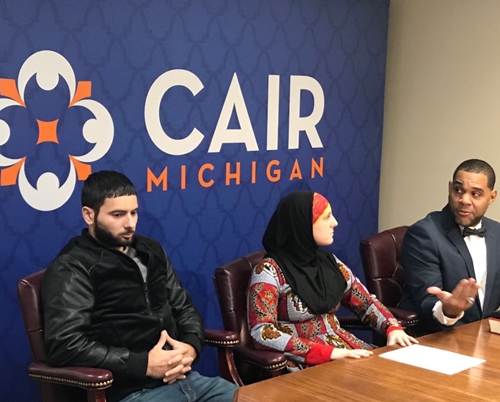 Mike Martindale reports at The Detroit News on a media briefing at the Farmington Hills office of the the Michigan branch of the Council on Islamic Relations:

Jaber, 26, of Dearborn Heights said an Introduction to Business professor at the college verbally attacked him in a classroom when Jaber inquired about help in a Facebook website promoting Lebanon. Business administration professor Michael Thomas questioned his loyalty as an American and implied he had been radicalized because he is Muslim, the student said. . . .

Thomas could not be immediately reached Tuesday for comment.

The community college takes "all allegations seriously," said Henry Ford spokeswoman Rhonda DeLong. . . . "Our due-process procedures include a full investigation of the alleged incident. When the investigation is complete, we will take any actions that are necessary and appropriate in accordance with the college's policies and mission, as well as state and federal law."

Thomas appears to be an adjunct instructor, not a professor, according to the Dearborn college's faculty directory.

In his account, quoted by The News, Jaber says:

"When I asked him for some advice on nonprofit work for the less fortunate or partnering on the [web] site, he suddenly changed. He said 'I bet you can't fly or leave the U.S. and are on a watch list.'

"I was born in this country and love it, but I also love Lebanon. There was nothing political about the site.

"His parting shot was that he worked with law enforcement and would keep an eye on me ... that something was not right about me. I felt threatened."