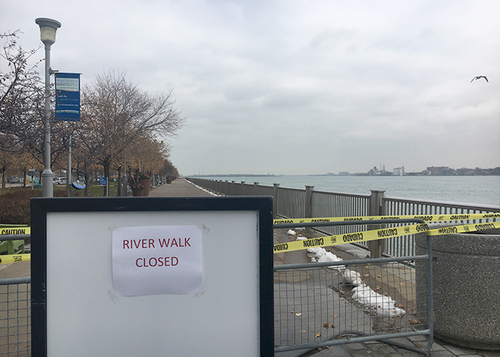 A key section of the Detroit Riverwalk is closed. Photo: Jack Thomas

A central section of the Detroit Riverwalk will be closed to pedestrians for weeks following a yacht crash early Wednesday.

Detroit police say a 61-year-old crashed an 80-foot boat into the seawall near the Renaissance Center, wiping out the railing between GM and Cullen plazas.

The Detroit Riverfront Conservancy posted on social media saying the area would be closed "at least for several weeks until we can get the seawall inspected and an interim railing in place."

The crash happened just before 3 a.m. Police say preliminarily that the captain fell asleep at the helm. They do not believe alcohol played a role.

A passenger was also aboard. No injuries or arrests were reported.