It's a balancing act familiar to anyone with an infant and a job, though it's not usually performed as publicly as Lt. Gov. Garlin Gilchrist II did Wednesday morning.

Roles as officeholder, union ally and dad overlapped when he brought 5-month-old Ruby Madeline Gilchrist to a discussion with security guards at the NAACP Detroit Branch office on Second Avenue. 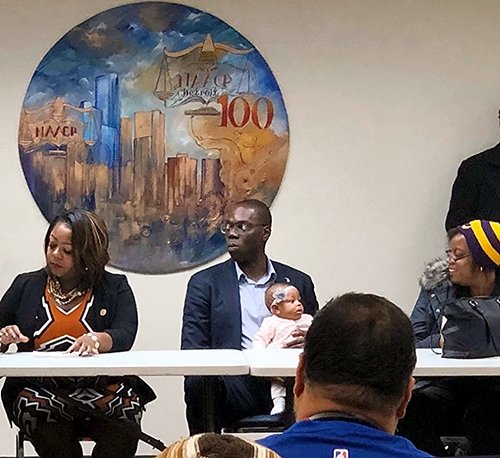 The lieutenant governor and his 5-month-old daughter Ruby at the NAACP Detroit Branch. (Photo: Twitter)

"It's the hard work you put in to make this city what it is," Gilchrist told workers for a contractor named SecurAmerica, which they say interferes with efforts to join SEIU Local 1. The guards picketed a downtown office tower Tuesday in an unfair labor practice protest.

It evidently was dad's parenting turn early Wednesday, so he filled two roles at the forum with local NAACP Executive Director Kamilia Landrum. "Baby Ruby was there to see democracy in action," Gilchrist tweets with the photo above.

His example of role-juggling prompts this reaction from Sara Wycoff, 33-year-old founder of Strategic Policy Consultants in Lansing: "Love seeing your little girl on your lap," she tweets. "We all need to be more accepting and flexible regarding the demands on working parents."