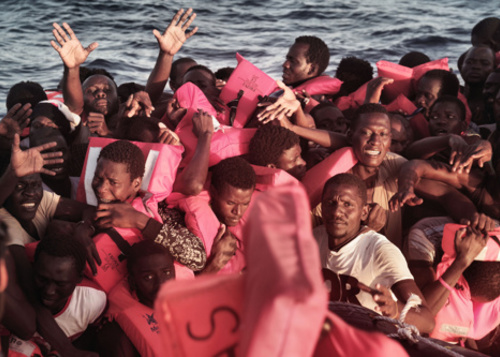 Yearly, refugees travel accross the Mediterranean Sea, seeking sanctuary in Europe. It’s a dangerous trip. Over 15,000 deaths have been reported since 2014, and over 1,000 this year alone, according to the Missing Migrants project.

Detroit-based journalist Kenny Karpov spent several years on NGO boats in the Mediterranean, documenting the stories of these refugees. He recently released a book called, "Despite It All, We Never Learn" and this weekend opens an exhibition by the same name of refugee stories at M Contemporary Art in Ferndale.

Karpov says he hopes his exhibition will increase empathy and awareness for the people who make this journey.

“Sadly, this doesn’t get much press anymore, at all,” Karpov told the Craig Fahle Show Wednesday. “I think the part that really gets overlooked ... is people don’t understand why they’re fleeing. They’re fleeing all kinds of persecution, human trafficking, civil wars, conflicts.”

Karpov has worked at the nonprofit Neighborhood Service Organization in Detroit and at 101.9 WDET as a photographer.