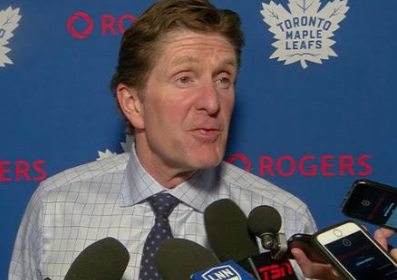 Only 23 games into the 2019 season, the Torono Maple Leafs have fired Coach Mike Babcock, who left the Detroit Red Wings to go to Toronto, the team announced.

The firing came amid a six-game losing streak, the Toronto Star reported.

“Today, we made the decision to relieve Mike Babcock of his coaching duties and named Sheldon Keefe our new head coach,” team president Brendan Shanahan said in a statement. “Over parts of the last five seasons, Mike has played an integral role in changing the direction of our franchise.”

Babcock, the richest coach in NHL history thanks to the eight-year contract worth $50 million the Maple Leafs handed him in 2014, led the Maple Leafs to the playoffs in each of the past three seasons. But playoff success has eluded him; he’s lost eight of his past nine playoff series.

It was no secret that Toronto general manager Kyle Dubas and Babcock didn’t see the game the same way. And Babcock had little success getting the team on track this season, winning just nine times in 23 games.