Freep: Fix the QLine or stop pretending it's a serious transit option

Randy Essex starts his column on the QLine's shortcomings with a truth lying in plain sight: 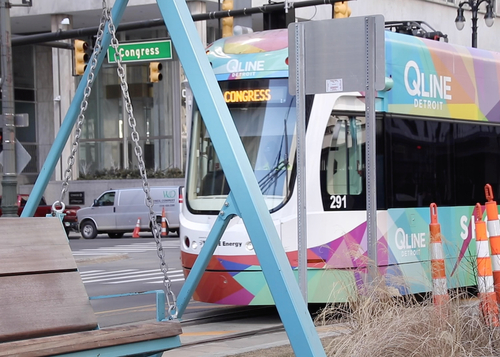 One end of the QLine run, at Congress Street (File photo)

During the Detroit Free Press/TCF Bank Marathon last month, about 25,000 runners were tracked via GPS technology. Friends and family could follow their progress via phone app and could pretty accurately estimate their arrival time at certain points.

So, while operators have an explanation, it seems baffling that QLINE riders cannot see streetcars' location via the system’s app or get consistently reliable estimates of when the trains will arrive at stations. (In recent days, customers get no information at all about arrival times because the NextBus cloud “solution” used by the QLINE has been down.)

The QLine, a straight-line streetcar that should be able to one simple thing -- efficiently transport residents and visitors north and south on Woodward Avenue from New Center to the Fist -- many days can't even do that, Essex points out.

It's notoriously unreliable, often out of service and still plagued by kinks that should have been worked out after two and a half years of operation. An inability for riders to track the trains' locations -- something even riders of SMART buses can do -- is only one failure of the system. However, at a time when the entire metro area desperately needs improved public transit, it seems we can't even get this one thing right. Essex:

This matters to continued progress in restoring the vitality of the city core. While the rest of Detroit absolutely needs investment and attention — and reliable public transportation must be part of that — the recovery of downtown is not complete, and it's not a certainty that it will grow as an economic engine and magnet for new residents.