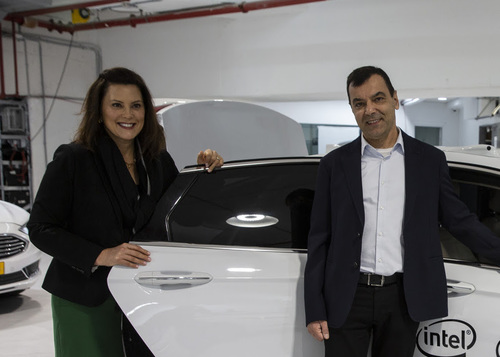 Metro Detroit Arab-American leaders on Thursday issued a sharp rebuke of Gov. Gretchen Whitmer for taking a “hush-hush” trade trip to Israel in the wake of the country’s latest round of clashes with Gaza.

The Arab American Civil Rights League and other groups admonished the governor on social media and at a news conference Thursday, days after Whitmer departed for her first international mission to attract business to the state. Their concerns included Prime Minister Benjamin Netanyahu's recent treatment of Congresswoman Rashida Tlaib (D-Detroit).

“This is Michigan — this is the Arab-American capital … We really took this as a major affront,” Amer Zahr, President of the New Generation for Palestine, said at the Thursday news conference. “By taking this trip at this time the governor is legitimizing these actions and we must question, how and why she has done this and how does this serve our state?”

The trip, to run from Nov. 17-23, came with little advance notice, just days after at least 16 Palestinian civilians, five of them children, were killed in the latest round of clashes between Israel and Gaza.

Zahr and others said Whitmer did not consult community leaders about the trip, as previous governors have.

“Governor Whitmer refuses to acknowledge us as an essential part of this discussion,” he said. “The community is left to feel disrespected, discounted and disregarded.”

It is unconscionable that any elected official, let alone the Governor of the state with such a large Arab population, would visit Israel as it bombards and kills Palestinians in Gaza. @GovWhitmer has no issue with being part of an effort to normalize war crimes. https://t.co/Bs0ehHmM0Z

The governor’s office sidestepped questions about the civil rights groups' concerns, but issued the following statement:

“Governor Whitmer supports all members of our diverse state. Further, Michigan governors have a rich tradition of traveling to Israel to strengthen our business ties and meet with leaders to discuss how we can partner to attract more businesses and jobs to our state.”

Detroit Congresswoman Rashida Tlaib — who was earlier this year denied entry to her ancestral home in the West Bank by Prime Minister Benjamin Netanyahu — spoke out on the trip on Twitter this week, saying she hoped Whitmer “goes and visits my sity,” in reference to the grandmother she's been hoping to see.

Apartheid is the Israeli regime restricting @RashidaTlaib movements in Palestine yet inviting @GovWhitmer to discuss trade. 2 US government officials from Michigan. 1 major difference.

Arabness is a crime in Israel, and this week 8 from the same family in Gaza paid that price.

"The *first* trip?," he asked on Twitter. "I mean, Canada's just across the river (and isn't actively legalizing settlements)."

Also that afternoon, Netanyahu was indicted on charges of bribery and fraud.

Carolyn Normandin, regional director of the Anti-Defamation League in Michigan, a pro-Israel group, says she thinks the trip is a good thing.

“I always think people who are deligtimazing Israel are at the forefront of Anti-semitism," said Normandin. "There’s a double standard for people who say these type of things. It really kind of smacks to me of demonizing the state of Israel and I really feel that’s not appropriate. There’s a lot of politicians who visit the state of Israel.”

Arab-American leaders questioned why the trip — made up of 18 stops — does not include visits to the Palestinian territories “to see the other side of the story.”

Congressman Andy Levin (D-Bloomfield Township), who is Jewish, earlier this month toured the West Bank, where he blasted Israel for its treatment of Palestinians.

Tensions between metro Detroit's Arab-American community — which tends to vote Democratic — and Whitmer run deeper than this issue. Last year during her gubernatorial campaign, Whitmer faced backlash for supporting Michigan’s 2016 anti-Boycott, Divestment and Sanctions legislation, which prohibits the state from contracting with individuals and companies who support boycotts against Israel.

Allan Lengel contributed to this report.